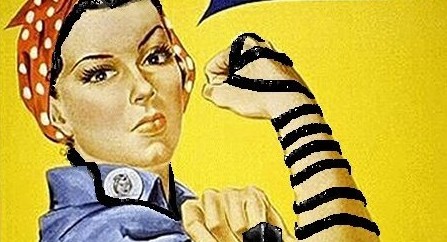 This whole “women wearing tefillin” debate has gotten me thinking.  Not so much about the debate itself, really.  But about how it reminds me why exactly I left the world of liberal Judaism for the orthodox world.

Because, you see, I am in some ways typical of a new generation of Jews.  Call us the Baal Teshuva Generation.  Or something.

A baal teshuva, in case you are unaware, is a person who used to not be an orthodox Jew who has chosen to turn his or her life upside down to take on the “stringent” (that’s the word they use in the papers) lifestyle of orthodox Jews.  Taking on those 613 mitzvahs, thousands of halachas, and millions of debates.

Not only that, women like Avital joined as well.  Women that were uber-liberal.  Some that even wore tefillin, if you can believe it.  These women, if you were to hear it from the liberal angle, “gave up” their world of rights and freedom for a world of restriction and child-bearing and all that crusty old conservative stuff.

Why?  Why would the women subjugate themselves like that?  Why would a guy like me give up so much to become a crazy religious nut?

The haters will tell you that we got tricked.  Or that we started off as “flaming baal teshuvas” and soon, quickly, lost our fire and now we’re stuck.

But the vast majority I know, while encountering obstacles they never could have expected on their journey, are happy.  Well, maybe happy isn’t the right word.  They’re… full.  They have a sense of meaning.  Something they lacked before they made their choice.

Which brings me back to women and tefillin.

Because I believe the story of the Baal Teshuva Generation is, more often than not, missing half its story.

This is the story of not just what attracted them to the world of orthodoxy, but what repelled them from the world of liberal Judaism.

There was something distinct that pushed most of us away from liberal Judaism.  A common strain, if you will.  There were many reasons, to be sure, but this one thing, this one thing was common with the vast majority of us.

Almost all of us grew up with this (very American but transposed onto Judaism) obsession.  It’s an obsession that eats away at the soul of America and which liberal Judaism has adopted along with it.

Many people think of obsession with the external as only having to do with judging people by their looks.  Or with valuing salesmanship over value, if you’re a businessman.

But it’s so much deeper than that.  Activism, the obsession with “rights”, is right there along with it.

The fight for rights, of course, is so important.  It’s why so many of us are able to live happily in our country, despite how different we may be.

But there’s a negative side to being too obsessed with activism.

I can’t tell you how many baal teshuvas were shocked when they first walked into a Chabad house.  Expecting restriction and judgments, they instead received openness and meaning.  And chicken soup.

In other words, the baal teshuva generation exists just as much because of where they came from as where they are now.

The liberal Jewish movement, and that includes many people who ran away from their orthodox lives, would really love you to believe that we were all tricked.  Or that we’ll come running back one day.

The more this narrative is spun, though, the more the reality is hidden.

The reality that meaning is what people are looking for.

And the constant debating over women wearing tefillin, over Women of the Wall, over this that and the other… it may all be important, on some level.  But the it’s the obsession over those things, the defining identity on those things, that will continue to cause the Baal Teshuva Generation to strengthen and the bleeding of the rest into the secular world.

Some of this debate has spilled over into the more liberal forms of orthodox Judaism as well.  That’s how this whole tefillin thing started right?

Of course, that makes no difference.  This isn’t about orthodoxy or lack-there-of.  Which is what so many people seem to misunderstand.  This is about appropriation of a world that values externality, of rights and activism, over meaning.  And orthodox folks do this plenty.

This is about people searching for something real in their lives.  This is about having a depth of experience.  About finding an identity that speak to our souls.  Because, at the end of the day, rights don’t do a thing for us if we aren’t “full”, if we aren’t connected to meaning.

Liberal Judaism may provide that.  But its obsession with rights and activism has blocked any possibility of that happening.  And the more orthodox Jews who start to buy into that worldview, the more who will be leaving those denominations as well.  Choosing to either be secular or a different brand of orthodox.  Because, to many of us, those are the only places left with any meaning.