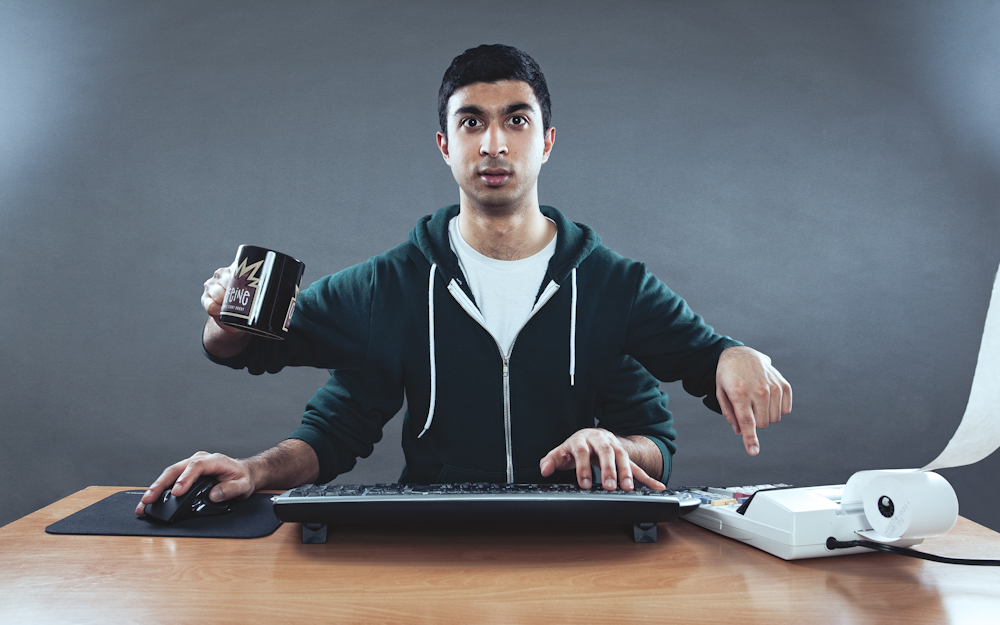 It’s more like my mind says, “Hey, loser, why the hell would you not do this thing?  What are you, lazy?  Stupid?  Cummon, get to work.”

And so I get all frightened and shriveled up and I say, “Yes sir,” to that voice in my head, and I say, “Okay!” with a bright cheery voice to whoever is asking me to do this one more thing for them.

The problem is that to whoever asks it’s only one thing.  To me, it’s one thing on top of an ever-increasing mountain.

It’s hard to work full-time while having a family, maintaining a blog, volunteering, answering email from readers, and basically everything that comes with being an orthodox Jew… and that’s just the stuff I’ve already committed to.  Not the extra stuff people ask for.

And so… when I overcommit, I inevitably prove that voice right.  That damn voice.  Because he’s got this plan, see.  He’s smart.

He tells me I’m lazy if I don’t take on every commitment that comes my way, but then… when all the over-commitment is starting to crush me, and I start to let some things go, he says, “You’re so friggin’ lazy!” again.  And I believe him.

So, I try and do everything.  But now I’m doing everything bad because I don’t have enough time to do anything right.  I’m just rushing my way through everything, half-committed to each commitment.  My job suffers.  My family suffers.  My writing suffers.  My life suffers.

And that voice, now, he takes even more advantage.

And soon, the worst part happens.  Much worse than the voice, but all part of the voice’s plan: The people I’ve committed to start telling me the same thing.

“I asked you to do just one small thing, Elad.  Come on.”

“You didn’t communicate,” or “What’s taking so long?” or “This isn’t what I asked for.”

Oy, and now the voice, he’s outside of me.  He’s coming from people I care about.  People I trust.

And all that reminds me of where the voice came from.  The voices of my past.  The teachers who didn’t understand why I didn’t do my homework.  Who got so frustrated seeing someone with “potential” throwing it all away.  And how some of them, they didn’t know how to communicate it, so they said, “Elad, you’re lazy,” “Elad, what’s wrong with you?” “Elad, when are you going to learn work ethic?”

The same words my voice says to me today.

And so, the voice, it’s become a cycle of self-fulfilling prophecy.  Telling me I’m lazy and then proving himself right with each whisper in my ear.  Proving everyone else that I frustrate right too.

It was only recently that I realized this was a voice, something outside of myself in a way, and not some sort of Objective Truth, some Voice From On High telling me the reality of how I work, the truth behind the essence of my soul.

Can you believe it took me almost 30 years of my life to figure that all out?  15 if you don’t include all the years that my brain was getting messed up, preparing me for such a way of approaching the world.  I can’t believe it.  And I’ll bet there are so many people who never do.

All the same, I did realize it.  I saw the voice for what it was.  Something outside, something that doesn’t necessarily have to be listened to.

And so, for the first time in a long time, I started to say, “No,” to commitments.

The voice put up a fight.  It started to scream louder and louder at me, saying, “Oh, Elad, you’re better than this!  You can do more than this!  Look at that poor person you’re letting down, oh my gosh, their life is going to be a disaster now that you didn’t help them!”

And it was so hard, I felt like I was committing some crime.  But I knew, I knew, when I looked objectively at my life that I was taking on too much.

And, amazingly, the more I said, “NO!” to the world, the more the world itself started to open up to me.  I wasn’t doing a million bad jobs, I was doing a few very good jobs.  My writing improved.  My work improved.  I was spending more time with my family.

Saying, “No,” to requests is still painful to me.  Always painful.  I still overcommit like crazy.  The voice is still there.  It will probably never leave, the punk.  He’s talking to me, saying, “Oh, come on, this is just a big way to make excuses for you being a bum.”

But now I know the voice is my enemy.  I know he is a liar and a dirt-snitch-waste-of-energy.  And that’s half the battle.  No good friend calls you lazy.  Confused or bad people call you lazy.  People that don’t know how the world works call you lazy.  And the same applies to voices in your head.