In August, after months of difficulties, disagreements, and conflicts with my boss, she turned around in her chair and looked me right in the eye and said, “Elad, we need to talk.”

I knew what was coming. Somehow, by the end of this conversation, I would be fired or I would quit.

I remember that conversation like yesterday. I had given my life to this job but things had reached such a low with my boss that, no matter how much I cared about the job, it was time to leave.

I remember walking out, leaving the room after it fell down around me, and going into one of those “phone booths” most coworking places have, where you can talk with people in private. I called a mentor of mine and told him everything, told him how I had lost my job, how it all went down, how numb, how dead, how horrible I felt. I had to go home to my wife and tell her. Had to look at my daughter and realize that in two weeks, I wouldn’t have any income to support her.

He, like me, had anticipated for a while that this might happen, but his voice was so sympathetic, so calm and sweet, that I immediately felt better. Sometimes we just need to talk to someone.

I’ll never forget what he said after I unloaded on him, after I let out all my emotions over this all, and all my worries and fears.

“In one year, you will be happy this happened,” he said.

He said a few other things on the phone that day, but that’s the line I will never forget. I remember it so distinctly because I remember thinking, “How could that possibly be? How could this be a good thing? This is bad. This is a disaster.” 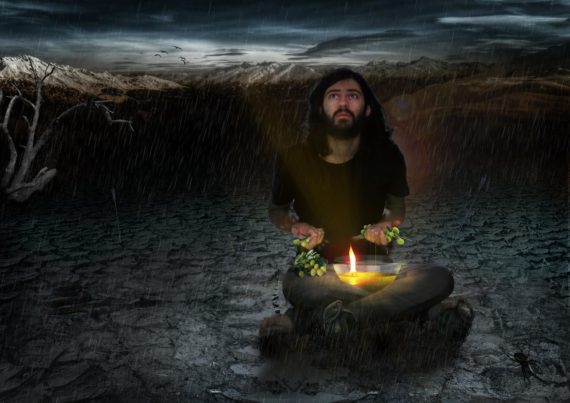 Those months were a wild ride, a crazy experience, and for a long time, I had my mentor’s voice in my head. One day, he said, I would be okay with this. This would be a good thing.

I simply couldn’t understand his point. I believed it, in a blind faith sort of way, but I couldn’t see it, couldn’t comprehend it.

But, as the time passed, as life slowly started to change, and my experiences started to transform my life, things started suddenly falling into place. It’s hard to explain in a short blog post how things seemed to fly from the air into my lap, how I started to slowly see why I had to leave this job to enter into a new life, how it had all been a vehicle to get back to America and live the life I was meant to lead. You can’t explain something like that because you have to live it.

There’s an idea that’s taught in Chassidus (and other places). There’s this idea that no matter how bad something gets, it’s always good. And when something is so bad you can’t comprehend it, that you can’t see the good in it, it’s because the good that’s coming from it is so beyond logic that we can’t see it. In other words, it’s an even better good than the good that you can see with your own eyes.

It’s now only half a year later. I have a job where my boss and coworkers have the same vision for the world and the way we approach our work. I’m also working freelance and loving it. I’ve started an organization that encourages art, creativity, and expression in Crown Heights.

As it turns out, leaving my job six months ago was one of the best days of my life.

And as I think about that experience, and meditate on how things unfolded, I begin to notice other points in my life where the worst really was the best.

I remember the time I had a bipolar episode which resulted in a near death experience, and how it took me years to realize how it was meant to happen, how it was the best thing for me, and how it guided me to a life I couldn’t have had without it happening.

I remember how pained I was when I started to see that the religious Jewish world wasn’t as perfect as I had hoped, and how some of the mentors I had idolized had fallen back to earth when I got to know them better, and how this eventually led me to writing Pop Chassid in a much more honest, real way, resulting in it becoming much more popular.

All those moments have become the way I define my life. They’ve turned from the worst into the best days of my life, and I thank G-d every day that they happened.

Note: All images taken with permission from X-Nihilo Creative by Shmueli Bell.