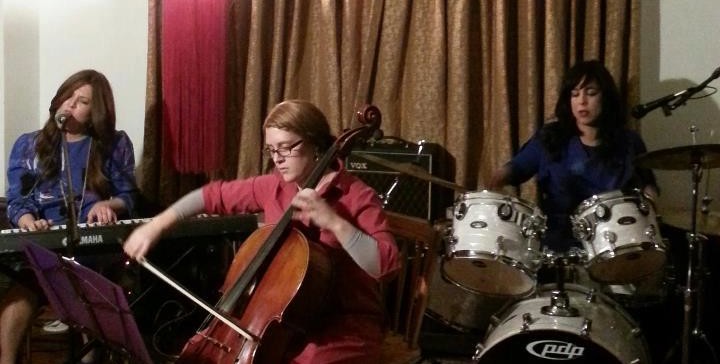 Guest post by Emilia Cataldo, the musician behind Nehedar.  Originally posted on her Tumblr.

I spoke briefly with a reporter from Haaretz who said she was writing a piece about the “all women’s rock scene” to which I quipped “you mean outside of this room?” We had a laugh and then discovered many connections, the reporter had been an arts fellow at Drisha in ‘09 and I was starting the fellowship in the fall.

The biggest surprise of the night was that the turnout wasn’t as great as they deserved given recent glowing press in publications as notable and far reaching as the NY Times, The Times of Israel, The Wall Street Journal and others. When I think about what BPS is trying to do, though, it doesn’t seem odd that audiences can be difficult to maintain. Even in the world of mixed gender performances where I live and work, it is notoriously difficult these days to scare up an audience. If your target audience is a young married parent to young kids, the prospect of getting that woman out of the house to an event that is essentially “girls night out.” gets that much tougher. In the mixed gender world, music is often the setting for a date, or a casual hang out with friends. That can’t happen when any male brothers, friends or spouses have to be left behind.

The music itself was transportive. BPS shines when they rock on signature songs like “Frigid City” and my new favorite “Homeland-Call-Stomp.” Elisheva Maister played her cello masterfully and Dalia Shusterman held down a confident, rock beat that is the true backbone to Wolfe’s ardent bare soul offerings. Good music from the orthodox world is rare and therefore quite exceptional when it happens. I hope that people are aware, whether they are lucky enough to catch a show or not, that this band is notable because they are that good. They do have a “catchy” publicity story to go with their package, but the music comes first.

Most people won’t realize how much work goes into an effort such as this. BPS is not able to go book a space at any local venue like I can. Every show that they do has to be specially planned to be a women’s only event. That means that whatever business hosts them has to do the mental arithmetic to decide whether this event can happen, and once BPS books for themselves, they would then extend opening slots to other female musicians in order to round out the event.

Just like when “Bridesmaids” came out and feminist bloggers begged women to buy tickets; Women’s stories are underrepresented, the narrative says, and if we show that we will come out and buy those tickets, they’ll know that they should keep making women’s stories.

I certainly hope that this scene continues to build, and attract more talent and inspire more women to come out of the woodwork and contribute to the scene, whether as filmmakers, photographers, or as more musicians – but most importantly as audiences. If people come out of the woodwork to help planning the logistics all the better. If anyone feels inspired to put together an event for BPS and these other female acts, they will be a part of something big and important and positive. And it’s important to recognize that in order to be a part of a good scene at the base, you have to be willing to dedicate your time without needing a payoff. Of course if it happens that’s great, but scene building is a passion first. That is something that musicians get used to pretty quickly and either take or leave: we’re not in it for the money.

I found the most fascinating part of what BPS is able to achieve, is that being in a women’s only space feels like a privilege for once, instead of a burden or a chore. Many of Bulletproof Stockings’ fans couldn’t even get in as writer/performer Matthue Roth lamented when BPS played his family speakeasy “The Hester”, but he was unable to see the band he described as his “favorite.”

Riv Eilfort came on third, after BPS and presented a very stylistic and savvy approach to songcraft and vocal style which worked beautifully on songs like “Back To You.” Her song “My Ultimate Role” speaks very honestly about her desire to find a life partner, a role that – while important to society at large, looms far larger in an orthodox religious sect. With Eilfort’s position as a young female singer making a name for herself, I certainly hope that the orthodox world can appreciate her approach to her art, and that it won’t count as a strike against her in any way. There is, after all, an idea that women performing is a rebellious act. This is not true from a letter of the law perspective, as there is no law preventing women from pursuing the arts, especially if they keep certain aspects separate from males, but there does exist inherent in the culture’s obsession with female modesty, the sense that women pursuing these kinds of public roles is immodest. I can best explain this by relating the story of when BPS was covered in a Crown Heights online publication. There should be nothing controversial about them, as they are going above and beyond the letter of the law by not admitting men to their concerts, but the comment section did contain some harsh judgements on these women’s character based on the fact that they create and share their original music.

For my set, while I did edit song choices for the all female audience and solo performance, I sang my usual honest, non Jewish themed subject matter such as a song about my brother’s experiences in Afghanistan. It could be argued, that by inviting me, and my secular (though mystically inspired) music to perform, that BPS is acknowledging that this isn’t a “religious” space, per se, but it is a space for women. They have said that they don’t want to be limited to a Jewish audience, but would be fine with half the population of the world as fans.

I’ve performed in all women environments, such as the ATARA women’s conference, but I rarely find myself in an all women’s environment where I make sense. And a big part of the beauty of the overall BPS presence is that they are able to do that. They functioned not only as event creators and headliners at the event, but as a bridge between the show opener (secular) and closer (religious). Which takes me back to the lyric “It’s better to be on the outside looking in than the inside looking out.” I think this speaks to the men, like writer Yosef Needleman-Ruiz who wanted to be at the event so much that he worked the door just to be close, and Roth, but it also speaks to the strength of the performers and audience alike who, while all different, are choosing orthodoxy (I am modern orthodox, but perform original, non religious music) for all it’s benefits and drawbacks, we are not looking out. We are proud to be in a culture that promotes female only spaces. (Interestingly, I think that an all female space could seem more controversial in mainstream society, but in Jewish orthodox culture, men only spaces and activities are commonplace, so the occasional all women’s event, while logistically difficult, makes perfect sense.) As long as BPS keep doing their thing and finding the energy to create these spaces, I will be more than happy to occupy the inside. I won’t look out. After graduating from Yeshiva University’s Stern College for Women, and spending time in Israel studying, I can attest that women’s only spaces aren’t so rare in the orthodox world, but ones that I want to be in are.