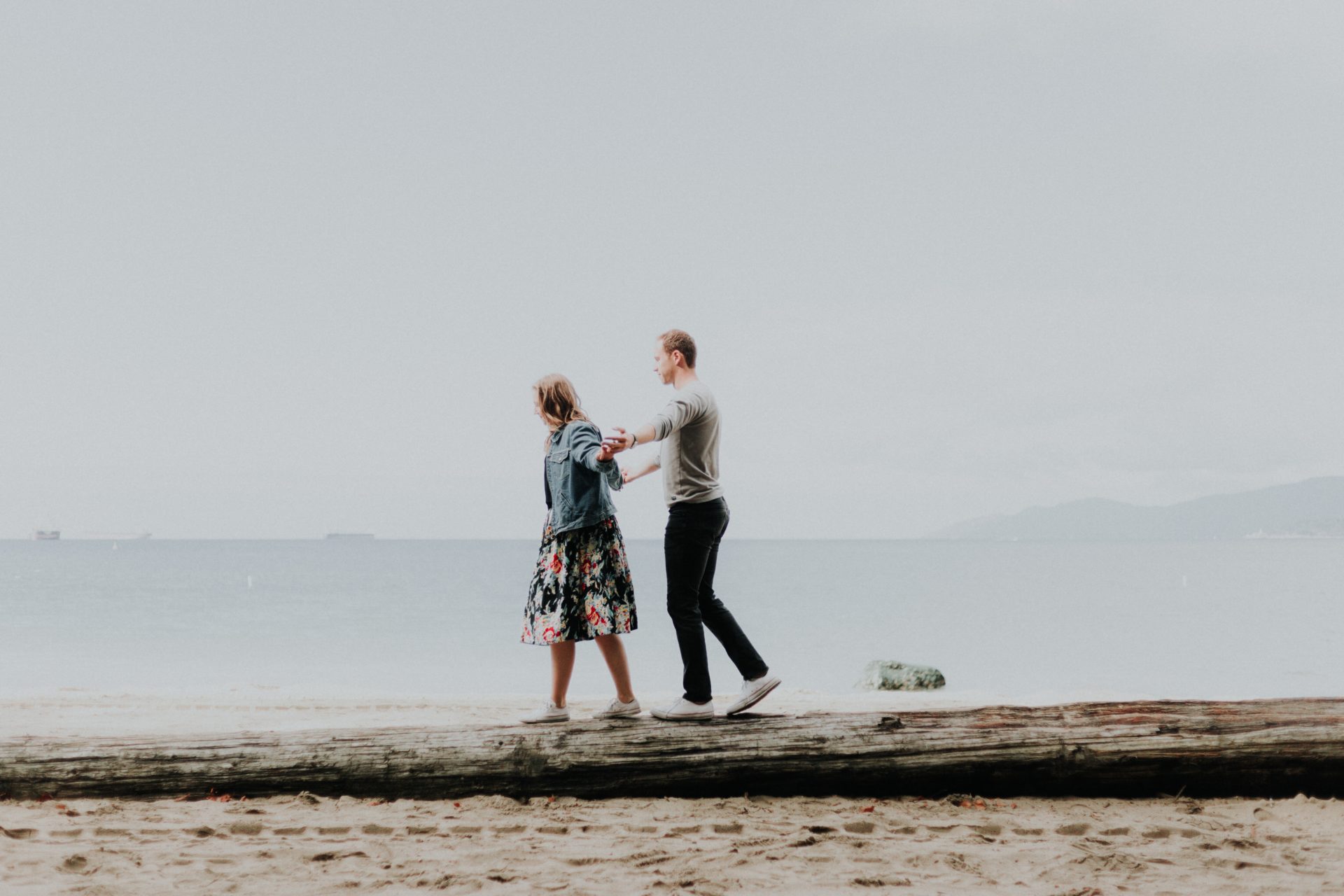 “Why do you keep doing that?”

“I keep asking you to do this, and you keep ignoring me.”

“If you cared, you would listen.”

These are words I’ve said to my wife, Rivka, too often.

Words I used to say even more than I do now.

It started because we got married.  Because we got married and were very different, and so it was almost impossible for me to understand how she worked.  I had heard this was normal in marriages, but I never anticipated just how frustrating it would be, and no matter what happened, I couldn’t help but take the differences seriously.

I grew up in a family where we were trained from a young age to put our stuff away when we were done using it.  Plates, toothbrushes, clothes, whatever.

And then I was living with this person who was messier than that, and who had a relaxed understanding about how and when to clean a room.  It drove me nuts.

Rivka had promised me she was going to work on it, and she did get better.  But for so long, I still blamed her.  Still got upset.

It hurt her when I did.  Sometimes we’d get in big arguments, sometimes we’d have trouble even being in the same room.  She felt so hurt by my blaming, and I felt so upset that she wasn’t “listening” to me.

As all of this was happening, something else was going on.

I would also mess things up.  I would also commit, to myself, and to Rivka, to do some things better.  Like the way I expressed my frustration.  Or that small stuff that builds up and drives people nuts, like this weird habit I had of leaving socks out in the living room.

But something weird happened whenever I’d make these mistakes.

And it was like, the worse the mistake was, the nicer she’d be about it.  I got too drunk at an event we were holding, acted a fool, and she’d say, “Yeah, I think you made a mistake.  But don’t worry, you’ll keep working on it.  I believe in you.”

As it turned out, we had also grown up differently in other respects.

I had been trained by teachers and other adult figures growing up that blame was important.  Maybe more important than the problem itself.

I didn’t do well in school.  I had trouble focusing on or caring about most of my classes except for the creative ones and the political ones.  And so, even at a very young age, I remember hearing my teachers saying things like, “Why do you keep doing that?”

And, “I keep asking you to do this, and you keep ignoring me.”

And, “If you cared, you would listen.”

I remember my third grade teacher grabbing my ear and pulling me next to her so she could yell this at me.  I still feel the sting in my ear when I look back at it.

I remember the year after that, my teacher berating me so personally that it caused me to cry one day, and her shaking her head and telling me to “Stop with the crocodile tears.”

Soon, I was escaping from them, trying anything not to think about their anger and the way it hurt and upset my parents. To cope with those feelings, I receded into video games and television.

When I got to college, video games transformed into pot.  Then poker.

Whatever I could get my hands on to escape from the judgmental tone of my teachers and professors.

It was interesting, though, because by the time I hit college, I wasn’t really hearing these things from professors as much.  Maybe in the smaller classes.  But for the most part, at my state school, professors weren’t invested in the same way grade-school teachers were.  If you failed, you failed.  If you sailed, you sailed.  You were on your own.

So, why was I still trying to escape judgement, I wondered?  What was I running from?

It was only when I got married, and Rivka refused to blame me for my mistakes, that I started to understand what something a pattern that had plagued most of my life.

As I blamed her, and she refused to blame me back, I couldn’t help but notice the disparity.  I’d mess up something huge, and she’d be there, supporting me and understanding me.  She’d mess up something small, and I’d take it personally and blame her, accusing her of not really caring about me if she kept making the same mistake.

As time went on, I’d speak to my therapist about my issues with blaming myself.  He’d point out how blaming was never productive.  That it only led to me trying to escape, just as when I was younger.  It was why I still had issues with video games.  Why I would sometimes spend days on social media, hardly looking at my to do list.  It was why, when I did make a huge mistake like my drunken foolishness, I would do everything possible not to think about it.  I wanted to escape being blamed.

Then I tried to figure out why, even though it was my dream to be a writer, I could hardly get myself to write more than once a month.  I bought a book that claimed it would teach me to be a prolific writer.  In it, she describes how most writers that have trouble producing also have trouble with perfectionism.  They were trained from a young age, she said, to berate themselves into good behavior.  Why?  Because their teachers and elders thought that was the only way to get them to fall into line.  Attack someone enough, and eventually they’d fall into line was the thinking.

The problem with that perspective, the writer claimed, was that it started with the assumption that we mistake-makers need to berated because we are broken vessels that have to be dealt with as such.  We are not good people, or hard workers.  We are lazy, we are irresponsible, and we don’t care about others.

If we weren’t broken, we’d already be doing the right thing.  Mistakes were not obstacles to overcome but evidence of who we were: fuck ups.

The author of the book recommended that we rewrite the scripts that we had learned from a young age.  She explained that we should start celebrating every time we wrote, even if it was only for a few minutes.  We should literally give ourselves rewards.  We should tell ourselves that we were good people working hard.

If we messed up, we should tell ourselves things like, “It’s okay.  Just keep working on it.”

After a month of doing this with my writing, I was writing almost every day.  I have hardly stopped since then.  That was seven years ago.

And so the more I’d work on not blaming myself, and the more I’d try and rewrite my own script, the more I’d notice something.  At first it was quiet, hardly something that showed up on my internal radar, but still quietly beeping and flashing its presence.

Soon, it got louder.

And then I saw it.  I don’t know when exactly.  Just one day, I heard the words that were coming out of my mouth to Rivka, and I noticed they were the same words I spoke to myself when I messed up.

“Why do you keep doing that?”

“I keep asking you to do this, and you keep ignoring me.”

“If you cared, you would listen.”

The same words my teachers had said to me.  The ones they had trained me to say. To myself. To others.

And now I was around someone who had committed her life to me, and instead of seeing her mistakes as a natural part of internal growth, or just different lived realities, I would blame her.

In retrospect, it should not have been a surprise: when we are trained to look for blame, it is not defined by who is being blamed.  The issue is that we are trained to think of people as either broken or whole.  And if broken, there is no hope for them but to force them into correct behavior.

When we allow our minds to go in that direction, then anyone is a potential target of that constant test of humanity, of goodness or brokenness.  Even ourselves.  Even our loved ones.

So, when Rivka was doing something “wrong,” I didn’t see it as a simple mistake, but as a test.  Was she good?  Was she bad?  Did she “care” or was she uncaring?

No different with myself.  When I made mistakes, I wasn’t a normal person growing and evolving.  I was a failure.  I didn’t make mistakes, I was a mistake.  No wonder I wanted to avoid thinking such horrible thoughts and ran to escapes like video games and drugs to turn off those thoughts: it’s quite horrible to think you are defined by every mistake you make.

And no wonder Rivka was so hurt by my blaming: it’s beyond painful to live with someone who thinks that your mistakes determine how good of a person you are (or aren’t).

So something else happened as I learned to identify this language, and to see it for the unhealthy, untrue poison it was.

I would use the language of the book more and more to get myself to write.  I would correct the words I’d yell at myself.  And the more I said those words, the more they sounded familiar as well.

They were Rivka’s words.

When I made a mistake, she refused to judge me.  Refused to define me.

Refused to blame me.

No, instead, a mistake was just that.  A mistake. A natural part of life.

“Yeah, I think you made a mistake.  But don’t worry, you’ll keep working on it.  I believe in you.”

Because she saw me for what I was: a person, good and bad, perfect and imperfect, broken and fixed.  One constantly in a state of growth.  One not defined by success or failure, but by a soul.

And so, I soon realized that all this time, throughout our marriage, my wife was teaching me how to love.

How to love myself.

And how to love her.