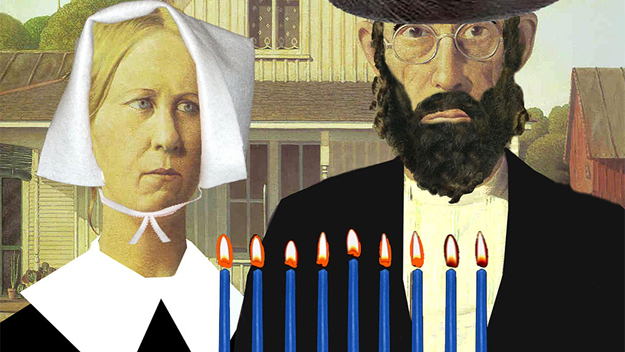 There, I said it.  Feels good.

For those wondering what I’m referring to, this is the only year for like a billion jillion years that Thanksgiving and Hanukkah will coincide.  So people have been really having a lot of fun with it, making videos, sharing recipes about how to combine the two holidays, etc.  It’s become a real trend.

Honestly, I feel pretty bad about this admission.  A lot of my blogging and online “colleagues” have been doing some of the above.  Some have asked me to share their stuff, and I feel so bad that I really really really don’t want to.  So, I hope one day they’ll forgive me for this blog post.

The interesting thing is that I’ve never been the kind of person to poo-poo something just because it’s popular.  I always hated when my friends (back when I had friends)  would say things like, “Oh man, I totally liked Green Day before they got popular.  Geesh.”

But this is different.

Funnily enough, though, I couldn’t figure out exactly why it was so different until quite recently.

See, during every Jewish holiday, if you’re like me and have a bunch of dorky orthodox friends, Facebook’s newsfeed fills up with these things called “d’var Torahs” (literally, “words of Torah”.  Meaning lessons about the holiday, basically).

I always got kind of bored with these things.  I mean, so many of them are the same things you hear every year.

Or if there aren’t dvar Torahs, there are just little nice thoughts about the holiday.  Thoughts like “Hanukkah taught me this, this, and this.”

But this year, with Thanksgivukkah coming around, that changed for me.

Because Thanksgivukkah is perhaps the most empty, marketing-esque, diversionary thing I’ve ever witnessed orthodox Jews get so excited about.

It literally has no meaning.  When people write about it, it’s only in regards to the food.  Or trying to somehow find parallels between the pilgrims and the Maccabbees (the Indians were the victims, folks!).

But, interestingly enough, because of that emptiness, I had a realization about those “boring” dvar Torahs I would hear every year.

I suddenly missed them with all my heart.

But they had meaning.  They had substance.  If you really think about them, they will make you want to improve your life.

And that’s when I was finally reminded of why I had become an orthodox Jew.

When I was young, as a secular Jew, holidays were “nice”.  They were moments to spend together with family and friends.  But there wasn’t ever any depth to them.  I’d learn a lesson or two.  But the lessons were empty.  Nowhere as deep as the Taoism I was learning.  Or the philosophy I studied.

So, it was interesting: the fact that Thanksgivukkah has bothered me so much has actually almost felt like a blessing.  It was a wake up call.  A reminder of why I’ve chosen to live life I’ve taken upon myself.

There are things to complain about. Cultural things, things that aren’t the way we wish they would be.

But in a world where meaning is seen as secondary; where it’s more important that the creative world entertain us than change us; where holidays are more about culture than connecting with the deepness of the world; where Thanksgiving and Hanukkah could ever be seen as compatible…

I’m grateful for the life I chose.

So thank you, Thanksgivukkah, maybe you served a purpose after all.