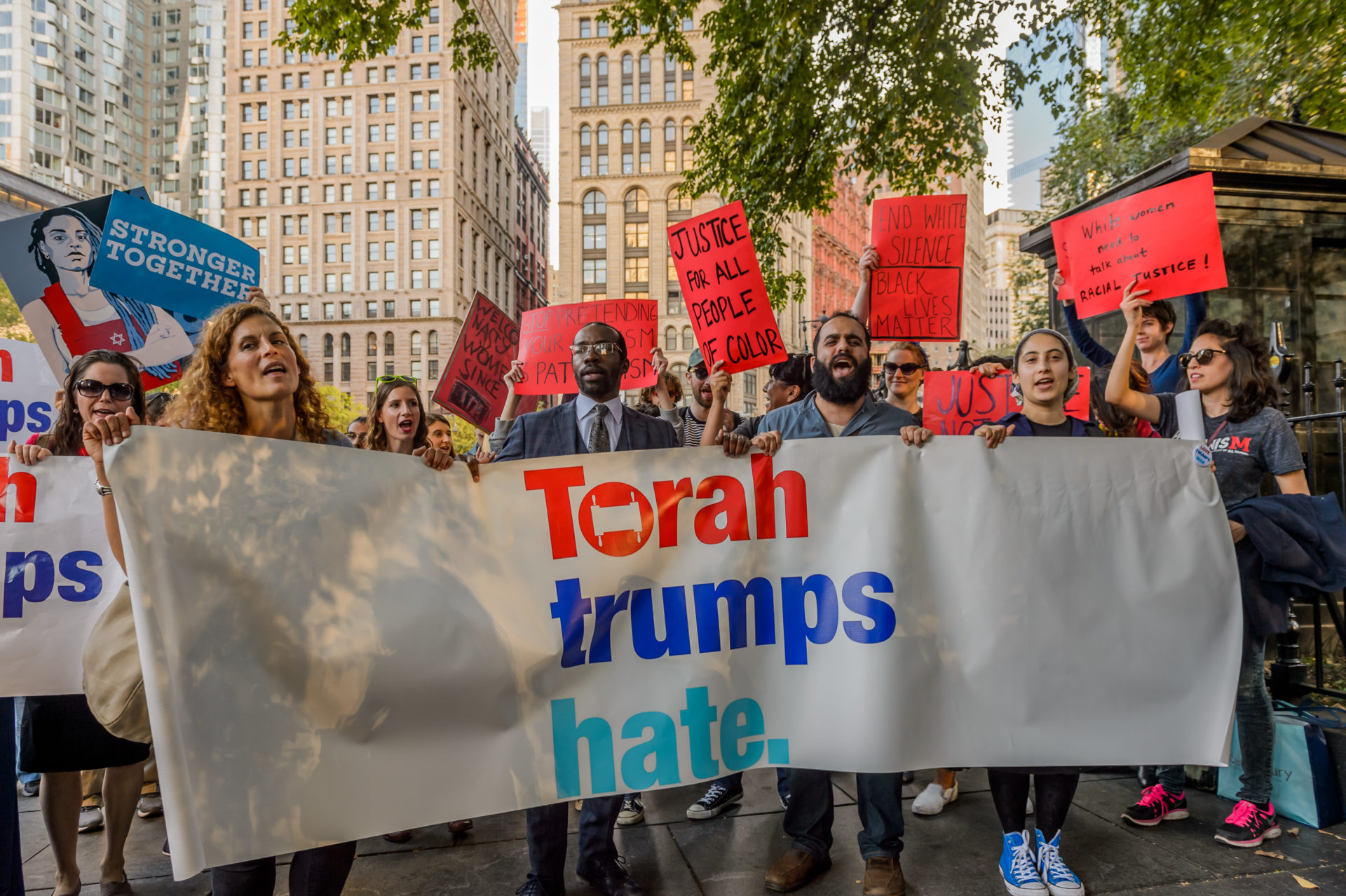 Note: This week I am doing a series called “Rejected Pieces” which will include pieces that I’ve recently had either rejected or bumped from some outlets.  The following piece was meant to go in a mainstream news outlet the day after the New York March for Racial Justice. Then Vegas happened. So, thanks to the encouragement of my fellow marchers, I’ve decided to publish it here as part of this series.

Some of us have lost friends.  Some have lost touch with family members.  Some have ridden a wave of hateful and vile comments directed at them by their fellow community members: online, at synagogue, even on the streets.

We are the anti-Trump orthodox Jews.

We are Jews so disgusted and sickened by Trump, a man who represents the opposite of our beliefs.  A man who fights to hurt the helpless and protect the powerful.  A man who brags about abusing women as if it a sport.  A man who uses our beloved Israel as one might a poker chip, throwing it around to gain leverage without any true concern for it.

That is why we lost friends and family members.  Because as we watched the country embrace him, we were shocked to see our own community members do the same.  The experience for many of us was something like entering the Upside Down of Stranger Things: we were in the same place, but everything suddenly felt ugly and wrong.

And until yesterday, we were in the shadows.  Some of the lone ones (like myself) were out proudly, but so many others lurked.  Afraid to come out.  To be seen.

Why?  For many people, it was fear of public shaming.  They saw the virtual beating people like me took for speaking up and decided not to risk the same.  Others are enmeshed in a world where being overtly political (if you’re not conservative) can mean trouble for kids at school, painful experiences with the people you must spend at least one day a week with, and more.  For some, the simple experience of losing even one friend or losing touch with a family member was so painful that being overtly political just didn’t seem worth it.

And then there is the other side: the fear of the left.  The fear of a growing anti-Semitism in the ranks of activists in particular, on college campuses especially.  The fear of being ostracized at marches.  The fear of aligning ourselves with things like BDS, which for many of us feels akin to betraying our own people.

All of this explains why the biggest anti-Trump orthodox Jewish group, Torah Trumps Hate, started by a visionary former orthodox woman, Victoria Cook, operated in secrecy for almost a year.  It’s why it was mainly created as a place to vent.  There seemed to be no place for us.

Only fear.  Fear of the insanity of Trump’s America.  Fear of our communities.  Fear of activists who might demonize us if we tried to join them.

In fact, the very idea of activism wasn’t even in our sights.  Individually, perhaps.  But collectively?  Hardly.  We were a home for those who felt they did not have a home, and that was all.

And yet, yesterday, that changed.

Yesterday, we went into the streets the day after Yom Kippur to join the March for Racial Justice.

Yesterday, almost a hundred of us appeared seemingly out of nowhere to stand up for a cause we care deeply about.

The cause is too large.  The stakes too high.  The innocent lives at risk too in danger.

That is simply all there is to it.

Yes, Charlottesville awoke something in us.  It activated our decision to march publicly.  Seeing men proudly yelling for Jews to be killed, while themselves killing a woman in an act of terror, touched something powerful in us.  Even worse was seeing the muted response of our leaders and communities.

Yes, that was the spark.  But it is not the fire.

The fire is what has been building since the election.  Since the moment Trump came onto the scene and so many of us have felt alone for so long.  It’s the fire of simply needing to do what is right.  To do what God demands of us: to live our lives morally, despite the cost.

When we publicly announced our decision to join New York’s March for Racial Justice, there was a flood of responses: people had been dying to do this.  The dam holding back their righteous anger and need to act had been broken.

And so we marched.  And we heard some things we didn’t like hearing.  But for the most part, what we saw is what mattered so much more.

We saw women in tichels (traditional head wraps) and sheitels (wigs).  We saw a group doing afternoon prayers together in the middle of the rally.  Some holding signs that said “Torah Trumps Hate” and others with signs that had quotes from the Torah to make the point.

And all of that together, and mixed in, with the people we were fighting alongside.  The people of color who this march was really about. To see kippas, tichels, and wigs, mixed in with such a march was beyond moving.  And it was a reminder that whatever uncomfortability we experienced was nothing relative to being part of something larger than ourselves.

Part of the conversation, part of doing the right thing.

Yes, there may be consequences.  Yes, it will be hard to negotiate the painful reality of our disagreements with some activists.

But it’s worth it.

Because we’re finally doing what we were meant to do: not just wallow in our silence, but act on our convictions.