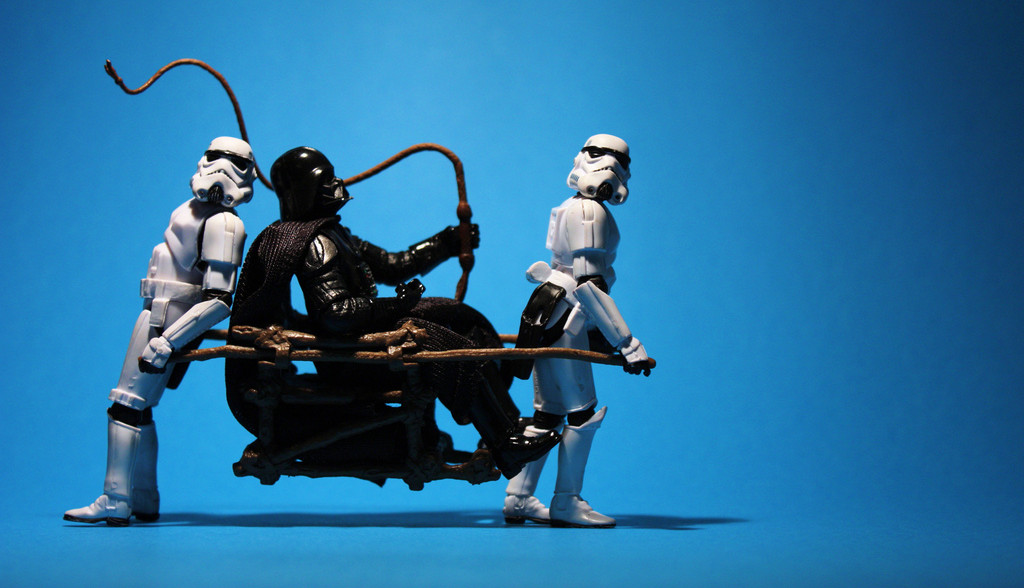 I just downloaded the best iPhone app ever created.

It’s called “Days of Life”, and it tells you how many days of your life are remaining.

Every day, I get a notification of how many more days are left.  Every day, the number is one less than the day before.

The point of the app isn’t really knowing how many days you have left.  It’s just a reminder that every day is precious and that our time is limited.

Which is why the most powerful moment is when you open the app itself and see a pie graph form.  A pie graph of how much of your life you’ve used up.  There, right in my hands, was a graphic depiction of how much of my life I had already used up.  I immediately felt motivated to take my life more seriously, to grow, to transform. 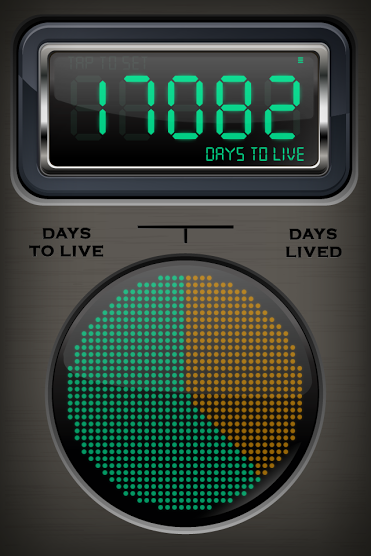 I found out about this app through an essay in the New Yorker that starts very similarly to this one.

But his essay had a more specific point: that the app’s purpose was to make us more productive.  He described how he has always been a bit obsessed with the idea of being as productive as possible, and that this app gave him an extra kick in the pants, an awareness that he needs to tap into a deeper part of himself and get even more done in even less time.

After I downloaded the app, I couldn’t help but be unsettled about his essay.  There was something that deeply worried me about it.  Productivity should be all we gain from awareness of our mortality?  Really?

And then I remembered an article I had read years ago.  An article about a woman who worked at a hospice and surveyed all her patients to discover their biggest regrets in the moments before they died.

Here were the results: 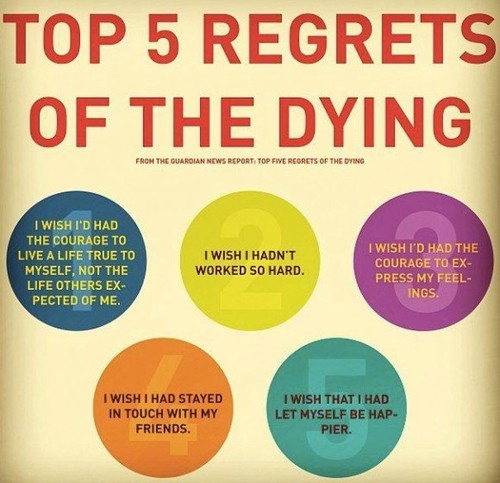 Number two: “I wish I hadn’t worked so hard.”  When I remembered that regret, I finally understood why the writer’s conclusion in the New Yorker was so wrong.

The people who had actually gone through life, who had actually lived it and were staring down the barrel of death, had reached the exact opposite conclusion of the writer: to them, being too productive was their biggest regret.

And it makes sense.  In America, we’ve fetishized productivity to an absurd degree.  There are entire blogs dedicated to it.  Conferences.  Books.  A person who works 80 hour weeks is a hero.

In other words, we’ve made productivity the point of life.  To the extent that a writer who is realizing his own mortality will write an entire essay about it.

The problem with this obsession is two-fold:

So many of us think that productivity happens by gritting our teeth, working hard for hours on end, and cranking out as much “creative” work as we possibly can.  And anyone that doesn’t is termed as lazy.  People are made to feel guilty for not spending all their time “working”.  This is a disaster.

Why?  Because our brains don’t work the way we’ve been led to believe they do.  We need, contrary to popular belief, time to let our brains process all the busy thoughts that go through them all day.  Some of the biggest creative geniuses of all time realized this, and spent much of their day lazing around.

We’ve been so brainwashed into thinking that “busy-ness” is all that matters in life that we haven’t allowed our minds a chance to absorb and digest.  We haven’t given ourselves time to just be.  Instead, we rush around, and there is little wonder that our society is so very uncreative.

True creativity, and quality productivity, comes from giving ourselves space to be lazy.  Space to think.

The most popular post I ever wrote on this blog, “I Didn’t Love My Wife When I Got Married” was written over the course of months.  Not literally, but in my mind.  I spent my free moments bouncing around the idea in my head.  Until finally, one day, I just sat down and spit it all out.  It’s little wonder in my mind that it was one of my most successful posts.  It was one of the few times I really gave myself time to fully form an idea in my mind before sharing it.

2. We have forgotten the why

This is the real problem, though: like so many things in secular culture, we’ve forgotten the “why” for our productivity.  We’ve forgotten the reason we want to take life by the neck and seize it for all its worth.

And so productivity has become its own end.  Its own why.

It is for this reason, I am convinced, that so many people regretted working so hard before their deaths.

Because productivity is only important insofar as it fits into our overall paradigm of life.  And because so many people in the world have stopped asking why they are alive, they have given up even wondering what that paradigm is, let alone actually living it.

And so, late in their lives, far too late, people realize the things that they’ve raced around chasing shadows.  Chasing fame, fortune, productivity.

When really, life is about so much more.  It’s about family.  It’s about friends.  It’s about connecting to the deepest truth (G-d is what I call that truth).  It’s about making the world a more beautiful, a more kind, a more just, a more true, place.

And productivity can only be sustainable, only be meaningful, if it is a part of that larger paradigm.  It can only have substance if there is a why behind it.  And a realization that sometimes it’s not the most important thing in the world.

And so, when we realize how limited our time is, we shouldn’t be thinking about how productive we are.  We should be trying to figure out if we are living our lives in line with our personal why.