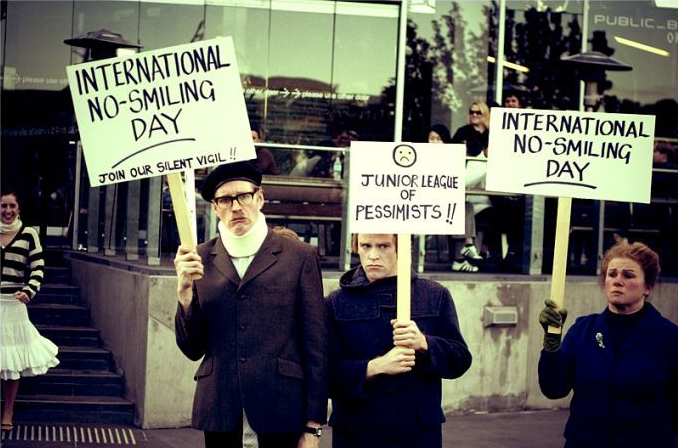 I used to be one of those people, although I wasn’t quite that shiny and glowing. Sweating a bit, which helped me glow, I guess. But for the most part, I just really wanted to listen to the glowing, shiny people.

They’re the type of people that try to tell us that everyone has some good in them, that if we look deep enough, we can see how glorious every freaking soul is, and that at the end of the day, we all deserve kisses and ice creams just for existing.

Then I became religious.

And slowly, slowly my mind started to shift.

See, there’s this thing about looking at things like a Jew, rather than the happy blond people of the world. A Jew’s state of mind is naturally dark. Look at Woody Allen. Look at Larry David. These aren’t people that we consider to be Jewish in a religious sense, but they exude “Jewishness”. And that Jewishness is dark. It’s pessimistic. 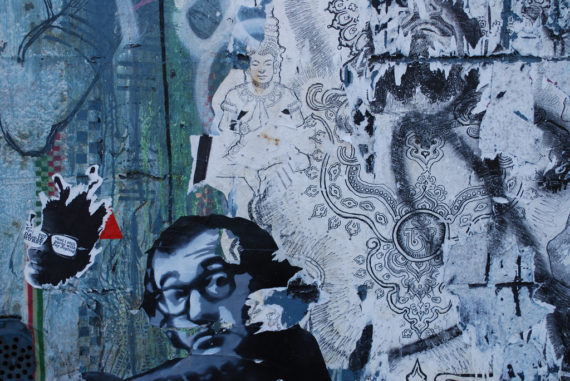 I fought it for a while, mind you. I would learn that we are living in “Galut” the time before anything good is happening, and I would get all itchy. But what about all the nice people I know, what about how perfect the world is?

But the more I thought about it the more clear it became.

See, when you live in the north suburbs of Chicago, where everyone has some money and there aren’t so many real problems, it’s easy to think that maybe the world is good. Even if you got bullied like me. Those bullies had souls, didn’t they?

But when I got out of my first world bubble a bit, and started to really look at the world, things didn’t look so good, really. I noticed the people starving in Africa. Oh and in Asia. Oh and in the Middle East. And in New York. And everywhere, basically.

Oh and then I thought about the people blowing up buses in Israel.

And then I realized that even the first world isn’t so great. I started reading about how the bankers have been using our economy as their own piggy bank and how nothing has gotten better since the recession. I started realizing that our leaders have gone down the drain.

And I realized that the Jews, far from being safe since World War II, are continually being put in more danger. Let’s not get into the details, but if you’ve been paying attention to the world, you know what’s going down.

Once I started to embrace it, it became impossible to ignore.

The world is a horrible, ugly, disgusting place.

Not only that, it’s getting worse. Every step the world takes towards the future is a step downwards. In a physical sense we are slowing improving, but in a spiritual and moral sense, things are just plain getting ugly.

Now, you would think these sorts of realizations would make a person go into a tail dive into depression. And, I’ll level with you, at first it was hard to see, especially when I started to realize that this level of degradation wasn’t reserved to the secular world, but actually applied even more strongly to the religious Jewish world. A world that, to a baal teshuva, can seem inviting and beautiful at first, but quickly shows its true colors once one digs deeper.

So yeah, it was tough.

But the more it became internalized, and the more I learned about Galut through Chassidus, something in me started to slowly click.

All of a sudden, I was starting to have this positive view of the world. Well, not the world, but my experiences within it.

Well, here’s the deal. Have you ever been in a situation you found totally grim? Like, you were low on money, or you lived in a place you hated? Something special happens in situations like that. Rather than trying to fool ourselves into believing that life is okay, that we have money, that we can afford that fancy dinner, we accept our situation, and learn to manage it. In other words, instead of overspending our little bit of money, we learn how to live a happy life within that darkness.

This is what happens when someone accepts that the world is dark. Rather than causing depression, it actually leads to a happy life.

See, there are people out there that want to believe that everyone is good. These people are tricked and manipulated more often than not. One only has to look at the way people trust everything the UN says, or believe that the Palestinian leadership is some sort of partner for peace to see the incredible danger one can be put in when one trusts evil.

No, friends. We live in Galut. We live in the dark depths of a crappy world that’s nowhere near it should be. And when we accept that, we can use that information to make ourselves stronger. Not just to make ourselves stronger but to be able to separate the evil from the good, to see the sparks of light within the black sea of this miserable world.

And as we do that, as pick up those sparks, look at them and embrace them, we can share them with a world that so very dearly wants itself to be good. We can say, “Hey, the world may not be good, but lets you and me take this spark and use it to light up the other parts of the world that have the potential to be lit up. Let’s you and me turn the world into the vision we have for it.”

And soon enough, dear reader, it will happen.