As I step out of my quaint office in Midtown Manhattan and then proceed to stroll along Fifth Avenue, I began to develop a bit of insecurity. I passed by some of the most expensive shops in the world, lavish X- Mas parties and thousands of thirty year old stockbrokers wearing real leather. It seems it’s still very easy to still feel like that little unimportant Jew in a big, giant world.

I continue my stroll until I come upon a familiar sight; a little old Jew sitting behind a foggy window munching on a fast food Chicken dish. I see a sheitel wearing mother and her daughter eating there also. I look up at the sign that reads Mendy’s. I smile and then pass a kosher wine store, and then the kosher Chinese place. But still, compared to all of New York, three little Jewish stores seem to not have little significance overall.

This minhag during this time of the year is to watch the Frank Capra classic “It’s a Wonderful Life” starring Jimmy Stewart as our protagonist, George Bailey. Though the film is often seen as the perfect X-mas movie, however, the true focal point of the film is the George Bailey dilemma “What difference does it make if I’m alive?”

And so we see.

We see how everything would have been different if George Bailey never existed. We see all the people that were never affected by him. We see that empty space that he never filled. And of course at the end, he’s incredibly thankful for being alive and naturally everyone else is too. And for a few minutes, we all feel incredibly like George Bailey. 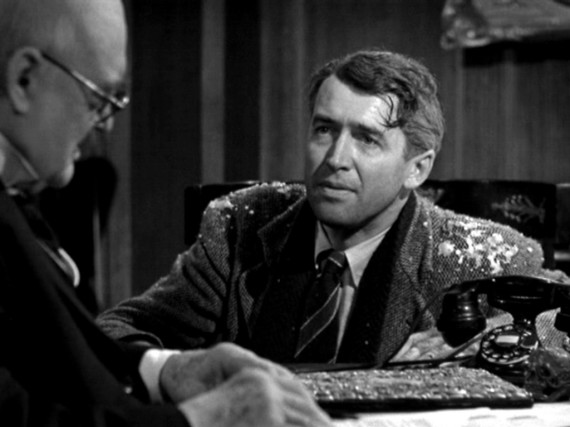 But overall we see that because George Bailey existed, the little world around him was much better off. And the most important part of this was George had a chance to see that for himself.

As a Jew, there are still times when it seems the world is much bigger than you and what all that you’re involved in. The journeys on the subway to the city shrink down to this little Jew who is overshadowed by the millions of others. You may begin to ask yourself the George Bailey question.

However, think of anything that takes up space, you’ll quickly notice its absence after the object is taken away (e.g. clothes on the floor).

For the individual, specifically the Jew, one can see his or her own existence as unimportant or ineffectual. This mindset inevitably leads to a state of “giving up” i.e George Bailey.

How is this resolved? Regarding a pure humanistic level, begin to note the effect you are having on others. Do you make them feel good or bad? Do you actions reflect you in a positive or negative way? Do you speak sweetly or harsh? Do you give tzedaka or ignore the beggar, etc. From a Jewish perspective, unfortunately, we can not yet see the effect of Mitzvos in this world. However, if you weren’t here to do that particular mitzvah that only you could do, who would? The answer would of course be “someone else.” But as in George Bailey’s case, there wasn’t another George Bailey, there was only him.