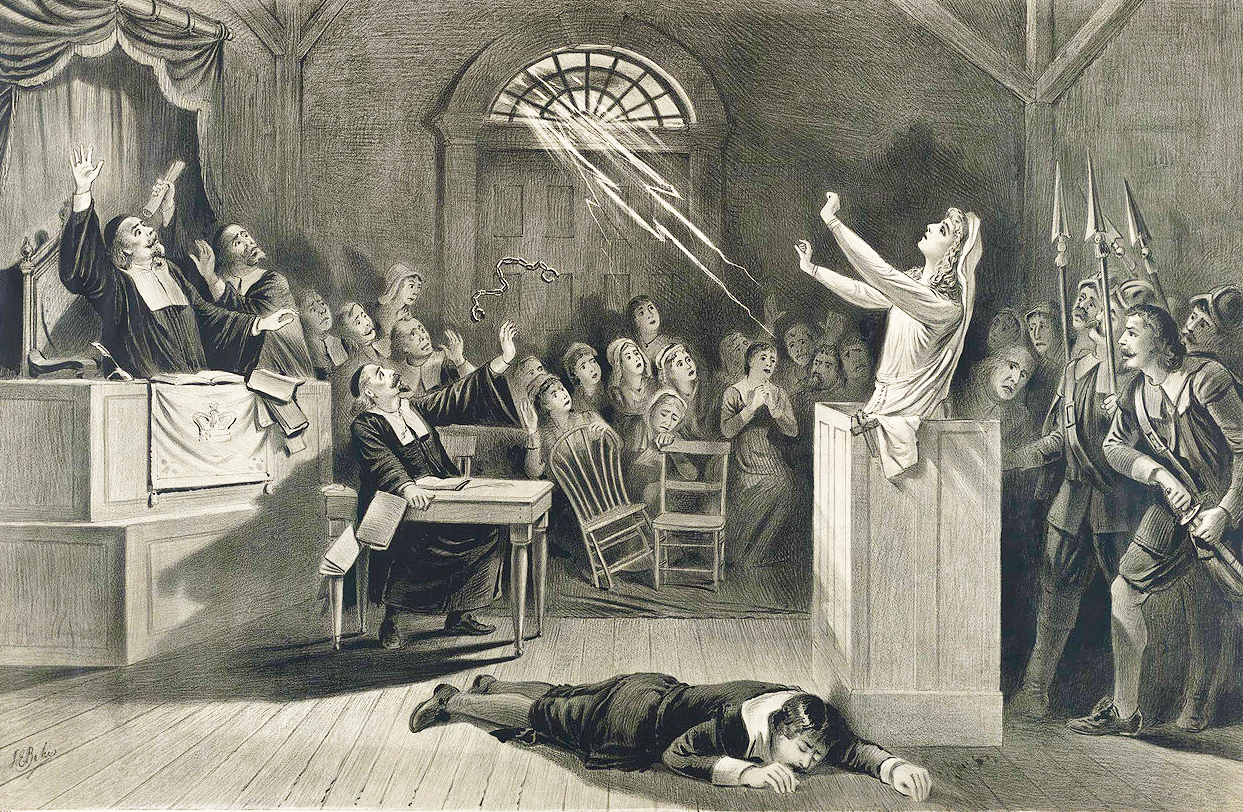 The internet is the Wild West.  Whether we realize it or not, we’re all pioneers in a (for now) lawless world, yet undiscovered in so many ways.

There are the startups, the gold miners trying to figure out where to tap for the best profit.

There are the villages, towns, and cities that have sprung up.  Some of them in the form of blogs, or forums, or groups within social media networks.

There’s no question that there are gold in these hills.  But the lawless, chaotic nature of this new territory also makes it incredibly dangerous, especially for those not on their guard.

The biggest danger, it would seem: online witch hunts.  There is, of course, online bullying, which is almost as bad.  But online witch hunts are the exponential version of bullying.  They can mean a million people yelling at you at once, although often all we need is a few hundred or thousands to pick us up and throw us off the cliff.

There has been more and more awareness about the dangers of internet shaming, especially when it comes in the form of large groups.  Monica Lewinsky recently gave one of the most popular TED talks about this very subject.  An article in the New York Times went viral about someone whose life was “ruined” by an online witch hunt. #GamerGate has exposed us to just how malicious young men can be to women who speak their minds (my gosh, it’s almost literally a witch hunt).

The inevitable conclusion of most of these articles and talks is that the internet shaming needs to stop.  The culture of the internet needs to change.

I couldn’t agree more, which is why I moderate every online community I run like a sheriff, my gun out, cocked, and ready to shoot anyone who’s gonna cause trouble in mah town.

But right now that’s the only law on the internet, just like the Wild West.  Despite our fears of the NSA and all the rest, our more immediate danger is the fact that none of us are truly protected from witch hunts and bullying, even if our sheriff is the best in the west.

I should know: as a blogger, I’ve been subject to more than my fair share of witch hunts.  From antisemitic sites who still hound me to this day (and who initially hounded me intensely for weeks) for a post that is now removed from the Times of Israel, to a post I stupidly wrote about modesty that led to what felt like an attack from every Jewish person on the web, to a post about atheists (don’t mess with those guys).

All of these posts are removed now.  I’m sure if you wanted to, you could find a copy of them somewhere if you wanted, reposted by one of the people I angered.

They’re down mostly because I couldn’t handle the harassment, the pain of being attacked incessantly from all corners, and because once a post goes anti-viral enough, no sheriff in the world can control a mob.

But I’ve learned some valuable lessons from the experience, and I want to share them with you in case you ever find yourself in the same situation.  These days, you don’t have to be a blogger to be the subject of an online witch hunt.  The wrong Facebook picture, a misspoken Tweet, or even a blunder in public (recorded by the mob around you), can lead to what feels like the end of the world: an eruption of anger all around you.

Unfortunately, none of us are immune to it.

But as someone who’s been through it, I want to share the steps that you can take to minimize the pain of the experience, and how to recover from it stronger and without your “life destroyed”, no matter what the New York Times will tell you can happen.

When the mob comes, there’s usually little you can do in the moment.  And key word there: the moment.  Later will be different, but right now you need to protect yourself.  The mob in the moment is a frothing animal, out of control, ready to take any scrap of you that’s available and eat it up.

You need to have a bunker mentality.  Don’t look at your notifications.  Don’t read any articles that may be written about you.  Only check your work email, if any.  Tell your friends to call or text you if they want to be in touch.  And don’t you dare go on Facebook or Twitter.

The reason: the monster is so out of control that there’s nothing you can do. You need to wait for it to tire itself out, or find another target.  Until then, you’re powerless, and that’s okay.

2. Surround yourself with love

But you can’t just hide, because that will give you a feeling of complete isolation.  What you need to do is surround yourself with the people that actually matter in your life, not the chattering masses who don’t know you.

If you’re married or in a relationship, run to your significant other and ask for a hug.  Tell them your pain.  Cry if you must.

Reach out to your closest friends, the ones you completely trust and who you know will see through the moment’s insanity and into who you are.  Ask them to come over.  Be open and honest about whatever pain you may be feeling, but also use them as a reminder that your life is still normal, that it may feel like the world hates you, but the people that matter love you with all their hearts.

Love, support, and comfort from others is absolutely essential during the storm.  They are the foundation and structure by which you’ll survive its gail-force winds.

1. Remember that everything is temporary

As the storm passes, you’re going to come out of your bunker, and you may be shocked at what has happened.  You may Google your name and see that the first 9 results are about the witch hunt you’ve just experienced.

You’ll wonder to yourself, “How will I ever get a job now?  What about dates or people who care the slightest about me?  I’m screwed!”

My friend, I promise you that even Google results aren’t permanent, at least not the first page.  I promise you that what seems like permanent damage now does not have to be.  Some of it is natural: people forget.  Google even forgets, giving a certain priority to recently published pages on sites (thus the reason you’re seeing the results on the front page in the moment).

But some of it is also in your control.

2.  The most important step: keep going

Are you a blogger, writer, or public figure?  Are you afraid this one moment will define you for all time?  The one worst thing you can do at this point to encourage a result like that is to stop.

Write more posts, posts that have nothing to do with what just happened.  Go back to posting on Facebook and Twitter with renewed vigor.  As your strength comes back to you, and you see the mob walking over to crucify the next person, use the energy, the pain, the power, of what just happened to renew your dedication to what you do.

Every time a witch hunt has happened to me I realized the only way to truly combat it, especially in Google-world, is to flood the past with the future.  To make posts that would become even more popular than the post that just seemed to destroy my life.

That’s exactly what happened.  A year after the antisemites hounded me, I had my first truly viral article.  Two months after my modesty travesty, I wrote an article called, “I Didn’t Love My Wife When We Got Married”, that went epic-viral, erasing both on Google and in my heart, the scars of what had so recently felt like the end of the world.

People may not realize it, but a big part of how those viral posts came about was the pain of being the subject of a witch hunt.  I redoubled my efforts, I dug deeper, wrote harder.  It’s quite possible I never would have had a viral post in my life if those hunts hadn’t happened.

That’s not to say you have to go viral to solve all your problems.  My point is simply that we can’t allow the mob to control us, and we can’t think they’ve truly destroyed our lives.

Thank God, the internet protects us from the way the mob used to actually work, which was, you know, killing you.

As long as you’re alive, you can fight back.  And all you need to fight back is to go back to who you are, but with renewed strength.

It may seem impossible at first.  It may seem ridiculous.  How could something that seemed so permanent one moment ever truly disappear.

And it won’t ever truly be gone, unfortunately.  Like any abuse in the world, the scars stay with us.  Unfortunately, if people dig hard enough, they can even see those scars, no matter what you do.

But no one of us is judged, in this world or the next, by a moment in time.  We always have the chance to make things better, to correct the missteps of the past, and to write over our scars with a tattoo that says, “I’m stronger than you.”

No matter what happens, if you don’t do any of the other steps, you must do that last one.  You must.  The others are simply what make it all easier.  Reading emails and Facebook notifications during a witch hunt is nothing but self-torture.  Hiding from your friends only hurts you more.

But even if you self-torture, even if you hurt yourself more by hiding from your friends, there’s always the future.  And when the storm passes, that future is the present.  Your chance to build over the ruins, something newer and better, is always there.

All you need to do is remember that no monster, no storm, can kill you.  Not even Google controls you.

In the Wild West, the importance of constantly forging ahead despite obstacles is even stronger.  Because just as there is danger, mobs, and bullying, there is also gold.  And if you let the danger hold you back, you’ll never find that gold.