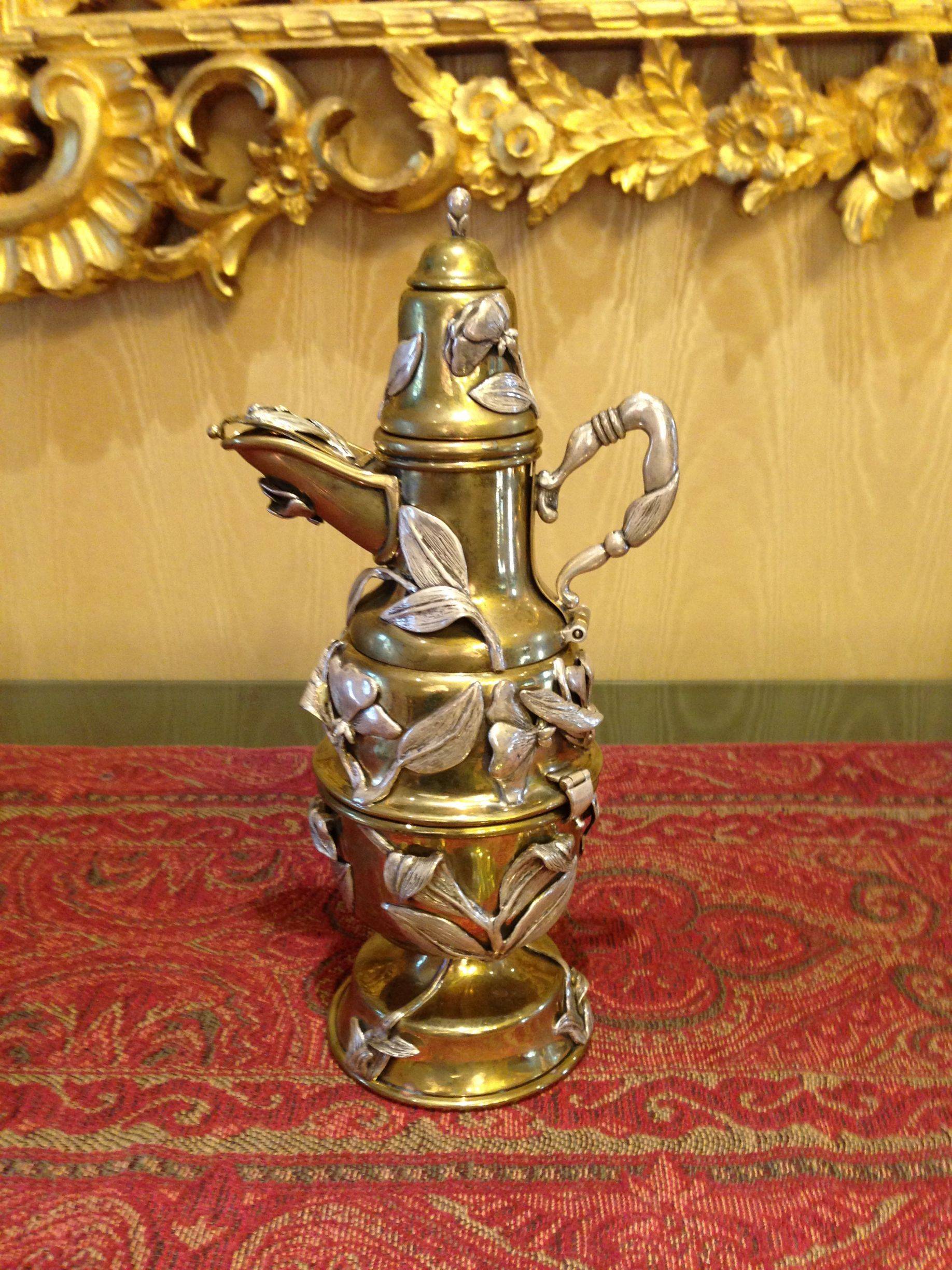 Hi readers.  Phew.  So, thanks to a helpful commenter who bugged me till I felt I had to prove her wrong, I did some more digging into this “Hidden Synagogue” and eventually got in contact with a silversmith artist called Yossi Swed.  The previously mentioned commenter had talked to him before and sent him the pictures of the “teapot” and he immediately said he was the designer.  When I called him, he said the same thing, explaining that he used to make a brass version a while back, and estimated that this piece was made about 20 years ago.

I’ll be honest, I’m a little shocked.  I guess sometimes we trust people on the internet too much.  The truth is, I think it was an honest mistake.  If you look at atcasktrength’s comment history, it seems like he genuinely believed the story surrounding this object.  And the truth is that it is modeled after such objects, but is a modern, artistic version of them.  Yossi Swed is known for making artistic versions of such objects.  I’ve tried to get in contact with atcaskstrength but still haven’t heard from since I last interacted with him, but I think it makes sense that this was all a misunderstanding, since he admitted himself that he didn’t get many details about the item. (UPDATE: He just sent me a message after I posted this with this message: “The truth is, I have no real idea of its origins, other than that my grandfather gave it to me. I’d love to speak to yossi swed and find out more…” So there you go.)

Anyway, as some commenters on my Facebook page have pointed out, the piece is still really incredible, and if you’re rich, you could even buy your own version.  And Jews did use (much less ornate, much simpler) items such as this to survive times like the Inquisition.

I do also really want to apologize.  I hardly ever “curate” things on my blog, and I posted the piece in much more of a rush than I usually do just because I thought it was so cool.  I give you my word I will do more research next time I post such a thing.  If you’re upset, I totally understand.

If you’d like to see a gallery of another, pure silver, version of Yossi Swed’s “Hidden Synagogue” feel free to go to this link, which was posted by another Redditor, and is what led to all these fun discoveries.  As you’ll see, it’s basically the same item, just a bit newer, more polished, and silver.

I’d like to thank Shaina Ima, the commenter which really got my whole investigation rolling, and who called Yossi Swed herself in order to get to the bottom of the story.  It’s always good as a blogger to remember that not everyone who criticizes is a troll, but can sometimes be the most awesome contributor.  And I’d like to also thank all the other commenters who helped us all start to track down the origin of the item, as well as Eli Fink for pointing out that it’s important not to rush to report things on the net.

Thanks again to them and sorry again to any readers that were misinformed.  I love you all.