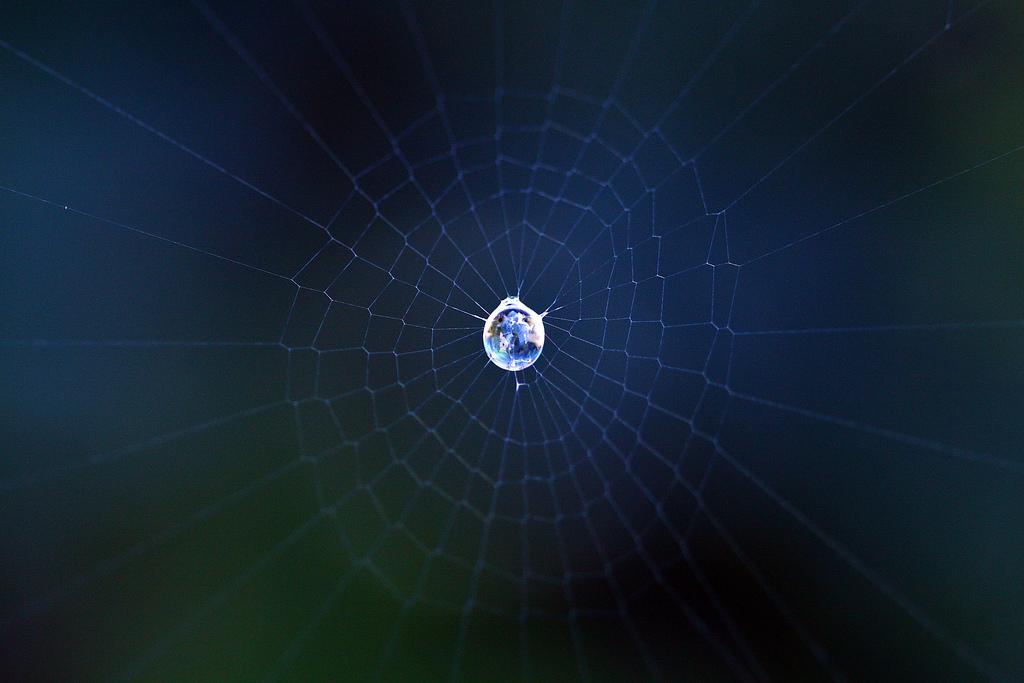 I remember once being in a philosophy class.  It was a winter “enrichment” course for 7th graders.  It was our last day.  Everyone was telling the class what they gained out of it.

Some people said it “expanded their minds”.  Some said it changed the way they looked at things.

Everyone around me at the time kind of looked shocked.  Some of them laughed and said, “Really?”

They all started exclaiming that the class made them believe in G-d a lot less.  Especially all the philosophy of science stuff.  How could you learn all that, expand your mind so much, and still believe in something as limited as G-d?

I couldn’t explain it at the time, but I think what had happened was that by realizing how infinite, how full of possibility the universe really was, the more I started to become open to the idea that there might be a god who runs things.

Learning about science taught me just how little control I have over the universe.  I learned that things are more based on probability than anything, that the vastness of everything happening around me means that at any moment, anything could happen.

It’s kind of mind-boggling to accept that reality.  To know how, really, you’re just taking every step with a sort of weird trust.  A trust that a car won’t plow into you.  Or maybe it will.  But all you can do is move on.

Believing in G-d is so similar, on an emotional level, that it’s almost like we’ve used different words to describe a similar idea.  Accepting that G-d is completely in control of every moment immediately implies that we aren’t in control of anything.  Perhaps science uses the word probability for the same phenomenon.  Religion just implies that the randomness, the lack of our control, is really just a sign of a grander plan.

But either way, the point is that I have no control.  When I pray, even when I’m praying for something good to happen, or for a person to not be sick any longer, I am not in any means controlling the universe.  Instead, I’m acknowledging that I have absolutely zero control.  I am beseeching because I know how small I am.  I know that I am just a passenger on the plane, and the only way I’ll be able to go where I want to go is to speak to the pilot.

The more science learns, the more it seems to realize just how small we really are.  Back in the day, we used to think we were just a planet with a sun and a moon.  Now we know we are a planet among nine in a solar system, among a crazy amount of other solar systems within one of billions of galaxies, within a universe more vast than we can imagine.

If that’s not a spiritual realization, I don’t know what is.

The funny thing is that spiritual folks have been trying since the dawn of humanity to realize just how small they are.  How they’re essentially nothing in comparison to what’s really real: ie G-d.

Religious people have known forever how important it is to embrace that fact.  To accept our tininess, to remain humble in the face of everything the universe is and everything that’s beyond it.  So many of us spend our lives acting like we’re the main characters in a movie that we forget our whole reason for living is to connect to that infinitude and bring it out in the world by living a life with a mission, not just a life of self-gratification.

The surprising thing to me is that people seem to think that science somehow teaches the opposite.  That our smallness is an implication that nothing matters and we should just give up and live a life devoted to ourselves.

How short-sighted!  How sad!  And what a sad twisting of the reality of the world.  To remember that our smallness is simply a reminder to live our lives in a state of giving is the greatest lesson both science and religion can teach us.

But no matter what you believe, there’s no question whatsoever that our just existing is the most special thing we could ever imagine.

And sure, many will argue, if you take billions of years and hundreds of billions of galaxies, eventually you’ll make a human.

Fine.  But who cares.  The point is that it happened to you.  That here you are, out of all those billions of galaxies and billions of years and all that business.  Here you are.  Take a moment and soak that in.  You are a miracle.

And if you’re an insane religious nutball like me and you believe that G-d made the world in six days (however you interpret that, whether it be six days that were really billions of years or six days that were actually six days), you simply can’t help but be blown away.  I mean, that something as immense as G-d, something so beyond reality and so real, the only thing that’s real, could take a moment out of his busy day and make me, and care about me.

Judaism teaches that we need to simultaneously realize that we are but like sand on a beach, but also that G-d made the entire universe just for us.  Just for you.  Just for me.  For each of us.

This is one I think that both the fanatics of science and the fanatics of religion hate accepting.  In fact, you could say they twist the reality of both science and religion to make themselves believe they have some measure of true understanding of the way the world works.

The same is true, I’ve found, of religion.  The funny thing about studying Hasidus, a mystical Jewish tradition, is that the answer for why G-d created the world is simply because, “He wanted to.”

Yep, that’s it.  And sure, there are super deep ideas of what “want” means.  But, look, the point is that we’ll never grasp it.  That the creation of the universe from G-d’s perspective is something that makes absolutely zero sense.

The fanatics on both sides hate hearing this point.  They want to believe that science or religion gives us access to true knowledge!  That the more we learn, the more we know!  That when someone argues with us because of their point of view that gosh darnit, they’re so wrong because they don’t have access to our amazing sources of knowledge.

But a true believer of religion knows that he knows, essentially, nothing.  And anyone that accepts that the reality of science is a constant growth in knowledge that changes, evolves, over time, realizes how little they really know.

And so, fine, maybe we don’t agree on all the details, and maybe we’re worlds apart (billions of galaxies?), on some of our beliefs.  But that’s so external, it’s almost laughable that anyone gives a crap.

Spirituality, truth, reality, these are all things that the external forces of the study of science and the idea of religion can only put clumsy words around.  That our minds can only pretend to grasp.

But they are there, and whatever method we use to access them doesn’t change that fact.  Truth is something we tap into, not something we can hold and examine.

If only everyone accepted that, maybe there would be less arguments between people who claim to believe in different things.