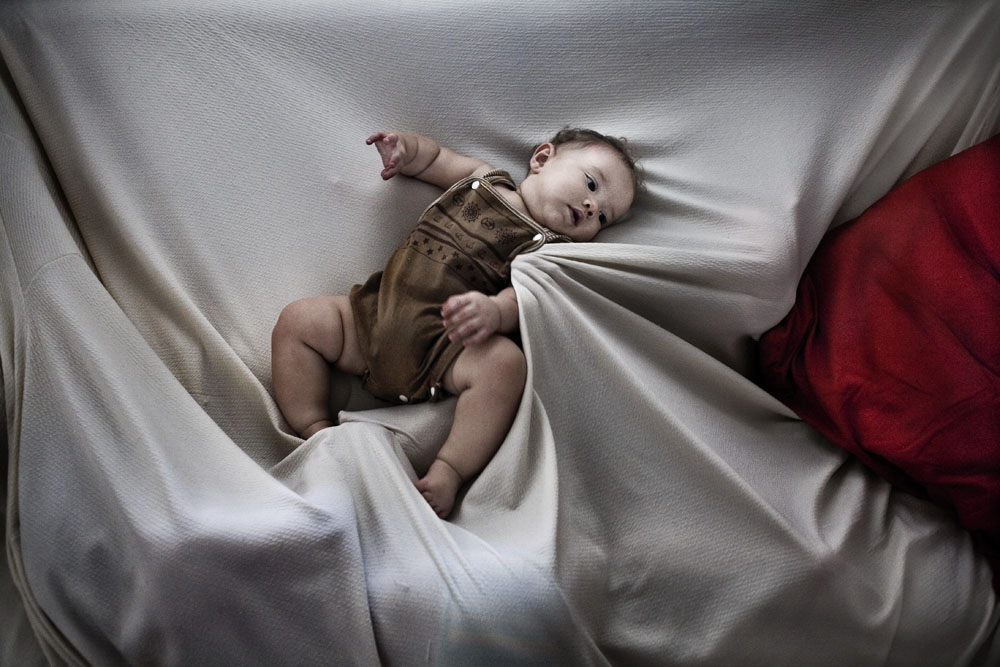 The angel is whispering a thousand secrets in my ears. I am trying to keep up, taking notes in my head. He’s still going, going, as he has for the past nine months. He’s telling me about darkness and light, about truth and falseness. I feel the depth wash over me as he lets his words surround my soul and glide toward my heart.

He is the only light in this dark pit. A spark in the darkness, he helps me see my “hands” he calls them and my “feet” he calls them. And he helps me see what I’m going to become one day, even though it makes absolutely no sense to me. I understand about truth and light and whatnot, but about being a “grown man” he calls it, I don’t understand. He says, don’t worry, when I leave today, I’ll forget everything anyway, even the parts about the darkness and the light. This makes me sad.

But more than sad, I am nervous. What is this about leaving? All I know is my beautiful dark pit. He tells me, didn’t I notice that it’s gotten smaller over nine months? And I tell him what are nine months. And he tells me, never mind that, you’ll forget the answer anyway, we still have a lot to learn. And he whispers more secrets into my “ears” he calls them. And I’m back into bliss.

But still, even as he whispers and I take notes in my head, I wonder about being a grown up and why I need to grow up if all there is in the world is the angel and me, and all the truths in the world, floating together in the dark.

And I forgot that he likes to listen to my head and so he answers me right away even though I didn’t want him to, and he tells me why do you think I need to learn all this, just for fun? And I ask him what’s fun? And he tells me I’ll know soon enough, and that didn’t answer any of my questions. And he glows a bit like he’s bothered by me and he says let’s learn more, because there are only a few minutes and I wonder why he keeps saying these things like months and minutes that don’t mean anything, and I put my thumb he calls it into my mouth he calls it and I listen to him, and I try to focus on all the truth and the light and keep my eyes he calls them on his spark because otherwise I’ll start playing with my cord and he hates when I do that.

But soon he tells me something that’s hard for me to understand, it’s the first thing he says that makes me truly scared, because he says, okay, it’s time for me to go. And I say what do you mean time? And he says, you don’t need to learn about that here, and again I’m mad because that doesn’t make sense. And he tells me there’s only one more thing to learn and I saved it for last because I wanted you to be in bliss until I left, and I feel my heart he calls it thump in my chest and I ask him what he means. And he says, well Elad, this world, it’s not really real. Well, that’s not entirely true, but let’s not get stuck in semantics. Anyway, this isn’t your world, Elad. Your real world is coming to get you in exactly thirty seconds and it’s time for me to go. Don’t be scared, it’ll all be okay. 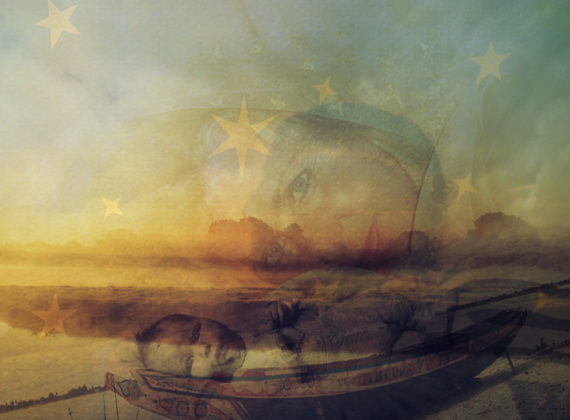 And now I want to scream at him because he’s telling me it’ll be okay, but I can see his spark is jumping up and down and it’s scared of the world he told me about and it wants to leave and he’s telling me to be calm, but I know something bad is about to happen, and I start yelling at him and telling him not to leave me, it’s not fair, he’s a mean, stinking angel, that betrayed me, and I hate him for tricking me.

And he says, hey don’t kill the messenger, remember I was sent here by someone.

And I keep yelling him and try punching him but he’s just a spark and I don’t have muscles he calls them and I just end up rolling upside down.

And it’s when I’m upside down that I see it. A light. Not a spark, like Angel, but a light. An exit. And I know whatever thirty seconds are, they’re not here anymore.

The spark comes up to me and he says, don’t worry, the Big One told me what to do here, cause lots of guys like you start screaming and don’t worry this won’t hurt one bit. Just listen to me. You’re gonna forget all this now, and it’ll all start over, and I’m going to tell you one thing you’ll remember and it’s this: keep looking.

And then he says, like I said, this won’t hurt one bit. And then this hand he calls it comes from his spark and it puts its finger he calls it up to my lips like he’s telling me to stop yelling, but then it presses down right onto my top lip and it pushes down really hard and soon it feels like fire which I learned about but now it’s real and it’s burning my lip and soon it’s travelling up my mouth and into my brain he calls it and I feel it lighting me up and I am consumed by it and disappearing into nothinginess and I can see the light entrance that opened coming closer and closer as my brain gets fried into nothingness and soon I don’t know why but I’m yelling, yelling, yelling, crying, crying, crying.

I don’t know what’s happening or what happened. All I know is that I feel like something important happened and I forgot it. I’m trying to remember why I’m thinking about sparks and things called hands, but the more I think, the more I forget and soon I don’t remember the words that I just said even though I remember saying them and soon I don’t even remember saying them and now all I know is that the light is getting bigger and bigger and my home, my cocoon, my dark den of joy is getting tighter and tighter, pushing me and pushing me, betraying me.

Everything that I feel as I get close to the opening is painful. It makes me feel different than the dark. It’s the opposite of the cocoon. It’s cold. It’s dry. It’s blindingly bright.

I push and I push, trying to force my way back in, maybe the world will change its mind. Maybe the light won’t want me. Maybe they’ll give up if I fight, if I claw, if I scream. I want to be back, back in the world I don’t even remember but know is better than the world I’m entering.

But the push of the walls around me are getting even harder, and I can feel my hands slip on the walls, and now I’m just a head stuck in a tunnel and I’m getting sucked down, and I can’t even fight anymore. Just scream and cry and wonder what is happening, why it’s happening as I watch the light get brighter and brighter, as I feel the warmth around me leave, and the cold begin to surround.

The tunnel gets dark for a moment, and I hope that maybe something is happening, maybe the passage is closing, maybe I’m saved! But soon I can see it’s not darkness, it’s just a shape blocking the light, it’s something that looks like a big version of my hands, and it’s coming for me, it’s coming to suck me out of my home, coming to eat me, coming to tear me away from my home, and now I’m really crying, screaming, screaming, screaming, and I feel my head poke out of the tunnel, and I’m half in and half out and I can’t see anything but white pure painful light burning into me all while I am attacked by gusts of cold.

I can’t see the huge hand but I can feel it on my back as I hear a voice and it says words I don’t understand words that sound like, Push, you can do it, Shlomit, just one more push and he’s out, oh it’s beautiful, it really is. And I don’t know what the voice is saying, but it sounds like a voice I remember, even though I don’t remember anything and I think this is the world outside, and I’m horrified.

Then there’s one more push, and now I notice it’s not just me screaming, it’s someone else, and it’s piercing my ears. I scream as I feel my body getting pushed out, pushed into the outside world, and I’m out there, and the hand is holding me completely now and whoever has the hand says something and it makes the other screams stop and now it’s just me screaming, and screaming I am. My whole body is wet and dry at the same time, cold and burning, and I’m blinder than I was in the dark. What the hell is this place? I think. 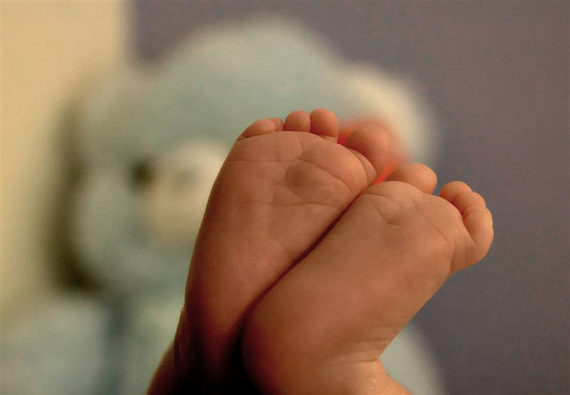 I hear words all around me, and I can’t help feeling like I’m the center of it all, and I feel the hands moving me around and rubbing me with stuff and then washing me off, cutting my cord, and then sticking me with something sharp and passing me around and around, and I feel dizzy and sick and angry and I wonder what kind of world would throw you around, cut you away from your world and then stick something sharp into your body.

I hear sounds that say, Can I hold him. Of course, Shlomit, here you go. Mazal tov. I’m being passed again, but this time the hands that are taking me don’t feel rough and mean, or cold. They’re warm and wet like like me, and I have a feeling that I am near someone that knows me very well, even though I don’t know who it is. The hands pull me close, and I’m on a body that’s even more wet than the hands, and even warmer too. I think maybe I’ll scream less, but I keep going a little more for good measure.

The sound coming from this body is different than the others. I recognize it. It sounds familiar. And I realize it’s the voice of the world. The voice that accompanied me all the time in the world of darkness. It’s the world, I think again. I’m outside of the world.

I’m in a light, clean, cold place with rough hands, things that prick you and clamps that cut off your food. A world of things to touch, sounds that aren’t muffled but clear and booming in my ears, and smells that hurt my nose. It’s outside, but it’s also backwards. Instead of warmth coming from everywhere, I have to cling to the outside of my world, onto her skin, clinging it for just a taste. Instead of feeling together, one, connected with the world, I’m separate now. No cord, no wetness all around me, no voice that comes from within the world itself. Now, I’m alone on the outside, clinging to the body of the world, the wetness just making me slip away. I’m alone. I’m alone. Where do I go now?

I don’t know the words, but they sound like the ugliest things I ever heard. I hate this place.