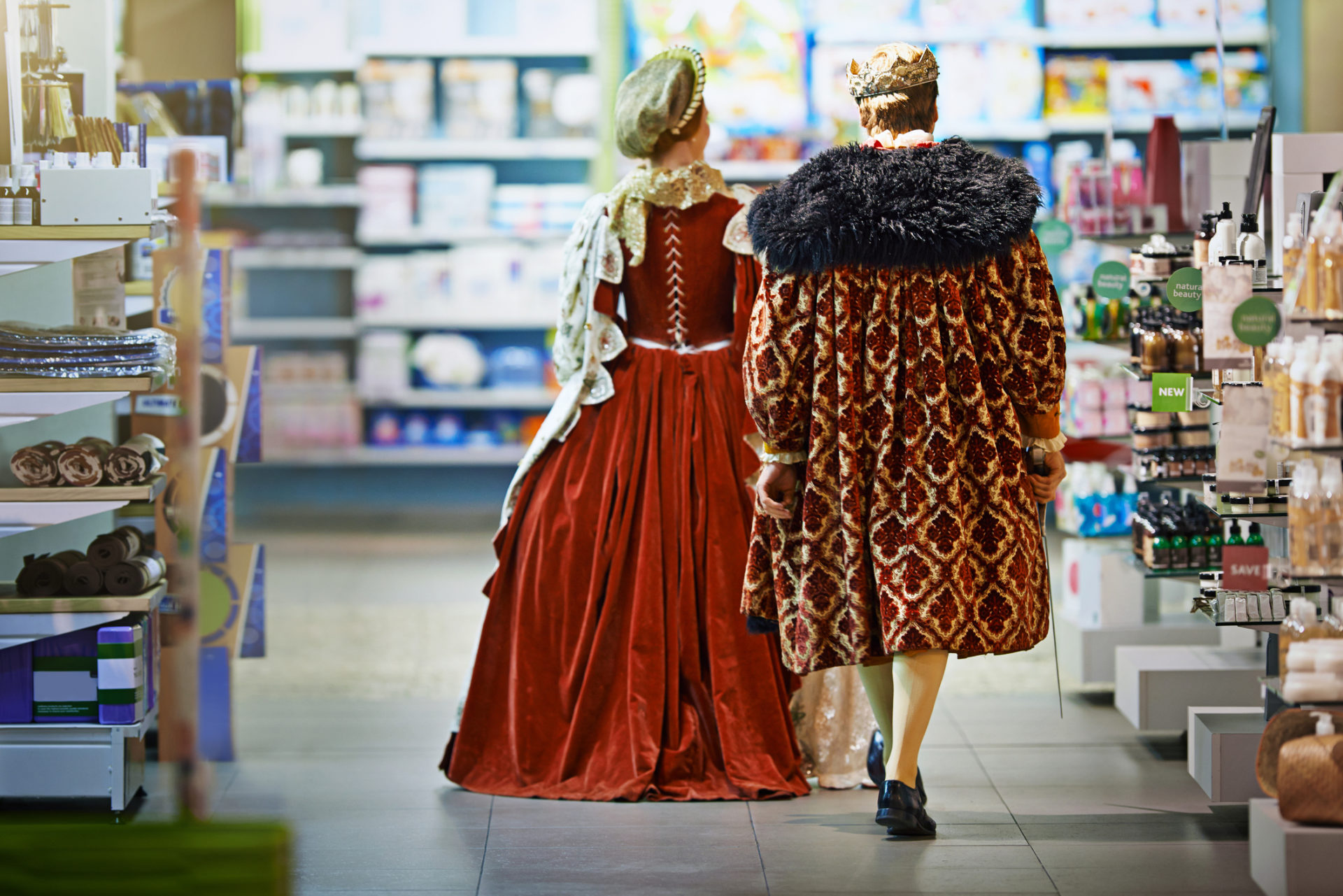 There was once a king and a queen.  They presided over a land beautiful and glorious, one that stretched almost around the entire world.  Its power was unparalleled, and its subjects happier than any in the history of the planet they inhabited.  They were happy, and so were their subjects, which made them all the happier.

But one day, a madness began to take over the country.  A sickness of the mind.  This sickness ate the very core of people’s beings, making them see things that weren’t there and believe in impossible realities.

The disease spread faster than wildfire.  Soon, entire villages were overcome.  Towns.  Cities.  To the point that the people who did not have the madness were themselves considered mad.  They’d be run out of town.  Told to stop spreading lies and misinforming the public.  They were seen as dangerous interlopers invading the minds of innocent people.

Some, it’s sad to say, were punished.  Put in dungeons without trial.  Some were attacked by mobs and hung.

The king and then queen watched all of this in dismay and horror.  In their palace, they were safe from the effects of the disease.  And as it spread further, they made sure to completely cut them and their staff off from the world, using only messages slipped through the gates to send their edicts.  The people, even as they became more mad, trusted their leaders.

But soon the edicts began to make less and less sense.  People wondered what “justice” was, when the very idea had been eradicated by the disease.  Others scratched their heads in puzzlement as edicts about “good and evil” began to make less and less sense.  In their minds, all that mattered were the illusions that overtook their senses, that dominated their minds.  The abstract concerns of a king and queen started to sound like the madness they were seeing in some of the people they had sent to the dungeons.

The king and queen, seeing this, and hearing reports of increasing subordination, even from their own knights and most loyal warriors, became deeply nervous.  What would they do?  The nation was becoming more and more mad.  How could they lead without access to that madness?  On the other hand, the only way they could lead properly was with access to the reality of the world as it was.

Finally, as they saw the madness begin to spread even to their palace, they knew they had to find a solution.  If they did not act quickly, they would either be executed by their own guardians, or they would fall into madness and lose all ability to know truth from madness.

They devised a solution.  They would allow themselves to also go mad, for how else could they properly lead?  But they would also put a marking on their heads and on their biceps.  Throughout the rest of their lives they would indeed be mad.  But in the mornings, whenever they arose, they would look at their markings in the mirror and remember the true reality.  The reality beyond the madness.  And they would be able to take that little slice, that moment of truth, and carry it with them even through their own madness.

I feel as if many of us feel like the king today.  We are seeing a world that is suddenly unrecognizable.  One that is quickly getting sucked into a madness we could not have imagined only three years ago.  And yes, while we can see the roots of the madness and we acknowledge that we have missed the signs that led us here, and the madness that already existed, we can’t help but also understand that the madness has reached a fever pitch, one that our world doesn’t look ready to abandon any time soon.

We are the kings and queens and the people kicked out of towns and others.  The ones who feel like we can’t help but scream, “What is happening is madness! Can’t you see it?!”

But they can’t.  And who knows, in a mad world, it is easy to believe that we are the mad ones.  The more mad the world gets, the more their madness becomes sanity and our sanity is madness.

The story above is actually a Chassidic story, one used to describe why we wear tefillin (and generally follow mitzvahs).  It tells the tale of Jews, in a world constantly attracted to the material, seeing God in things instead of in truth, and in need of a lifeline to remind them of the sanity of holding onto a tradition thousands of years old which has demanded we give ourselves to it completely, despite the world always, always thinking us mad for doing so.

But the story may also matter for any of us who feel mad as we hold onto our sanity in the roaring river of untruth that threatens to suck us under.

The question, then, I think, is what is the tefillin for us when even those who wear tefillin with us are going mad?  What if it’s especially those whom we share so much with that we believe are going mad?

The only answer that makes sense to me, the only sign of sanity I can find in the raging river, is community.  Others.  People who believe in our sanity.  People who are themselves dying for a sign.  People who need us just as much as we need them.  Believers in the sanity that we believe in, even if the rest of the world is going further and further insane.

Every day, every day that we engage with the world, it is another dose of insanity.  Another moment where we may either give up, or get sick trying too hard, or cry, or pretend that really, everything is fine, or start to buy into the narrative of madness.

Yes, tefillin keeps us tethered to God.  But it is people who help us remember that tefillin itself is a sign.  And when the people who once reminded us of this have disappeared into madness, well then we need to find others who will make sure we remember.

And so.  Community.  That is the tefillin of the heart, of the weak and vulnerable part of us.  Others who share our thoughts and can look at us every now and then and say, “You are not mad.  You are sane.  And you must keep believing this.  Because if you don’t, I won’t either.  We are tied together, from head to head, from bicep to bicep.  From mind to mind.  From action to action.  Remember.  You are sane.  You are good.  Please don’t forget.”

And so.  If you are reading this.  And you know what I mean.  Please remember.

You are sane.  You are good.  And we need each other.  We are each other’s tefillin.