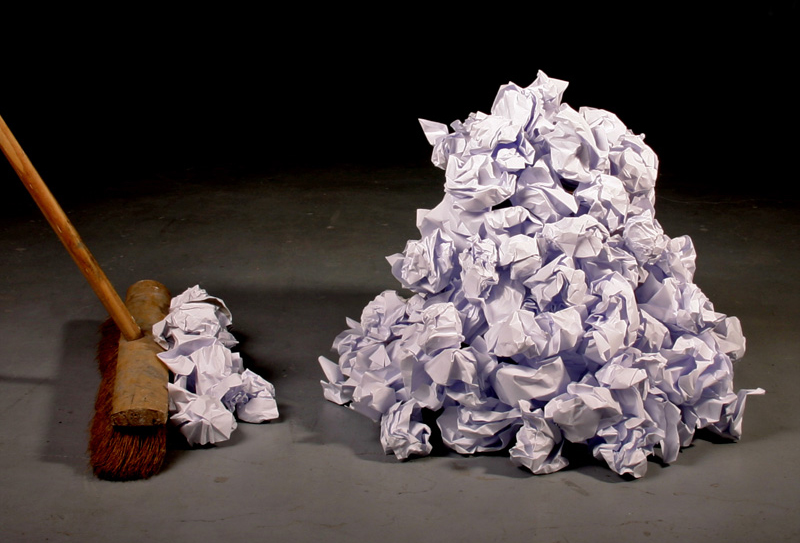 Sure, people like to put their nice words in for art.

“Oh, that’s so nice that you do that, that you try to get other people to do it, that there is a place for people like you.”

“People like you,” as if to be an artist, a creator is some sort of aberration of nature, a disabled person that needs to make sure he has his support groups, his friendships so that he’ll be content.

“That’s so nice, that art over there, that you do.”

But when it comes right down to it, do people really think that art matters?  Would they consider an art studio as important as a hospital (I can even hear artists gasping and shaking their heads)?

Ironically, it doesn’t matter what society you look at: it could be the most religious of the religious, or the most materialistic in the world (the one we inhabit when we look around), art is not seen as… real.  It’s a luxury, an extra, something that some “privileged” people can do if they feel like it, but it’s not for the people doing the “real” work out there.

What people don’t realize when they’re caught up in their materialistic view of the world (the one that says, “STEM education is all that matters! Get a living, you hippie!” and the other one that says, “Well, our job is doing the Lord’s work, you see,” or “I support art, I do, but does it have to be so… honest? And what’s with that darkness or that message that makes me uncomfortable?”), what they don’t realize is the great something that art is, the why of it, and the terribly important way it matters to us all.

And why, yes, it’s just as important as science, medicine, religion, and everything else.

Did you know that despite the horrible conditions of the concentration camps, Holocaust victims had a vibrant cultural and musical community?  Did you know that even the poorest societies and groups of people will compose music, poetry, paintings, drawings?

These people defy Maslow’s stupid pyramid.  People that put art over food, over materialism, over the dryness of black-and-white-ness.

What do they know that the graded-ones, the “objective” ones, don’t know?

They know three things, actually, and they’re the most important things we as our society have forgotten:

Meaning is our lifeblood.  And let me be clear: by meaning, I don’t mean the “objective” truths shoved down our throats by the one who claim dominion over one particular brand of truth.  I am talking about personal purpose.  I am talking about the meaning that G-d (sorry, materialists!) has implanted in us that is a divine ray coming from the prism of reality, displaying its color in a way that only you, only you because you are so unique and special, can truly understand.

Meaning matters so much that the man, Victor Frankl, who survived the Holocaust and wrote its most important scholarly work (which is really a work of art) said that meaning is what matters most to the survival of a Holocaust victim.  Meaning.  Purpose.  Inner, unique purpose.  He gave an example of the man who had a scientific thesis he was working on.  Frankl told him to keep working on that thesis.  That’s what kept people alive.  Meaning.

And, by the way, recent scientific studies have backed up this truth.

The second thing: emotion.  Oh, emotion, the forgotten reality of the “objective” livers, the ones who want us to think that we can put ourselves into a box and call it “reality”.  The fools, if only they understood how many people they kill on the inside with that frame of reality.

Emotion, your emotion, matters so much.  It matters just as much as your logic, and in the end, it will provide you more access to meaning than that logic ever will.

We happen to live in a society that is mentally sick, that is taking pills to combat the depression that now exists in one third of our entire society.  And while I am not against pills (I’ve been known to take some from time to time), the high level of depression that is afflicting our country is a sign that we are ignoring an element of reality that exists within us all.  Our emotion matters.  And it contains its own truth.

This is the third value art, and it’s a value that’s ever more important with the advent of the internet: the community and connection it creates between the creator and audience.  Art, while often done in private (although just as often not), is a vehicle for creating community.  It is why there exists, even in the most rural town something called a “community theater”.

And it is also not surprising, then, that as our society has valued things like community theaters less, and materialism and “objectivity” more, the more alone we’ve all felt.  40% of Americans claim they are lonely. And people who are lonely get sick more easily, and die sooner than people suffering from obesity.

Personal purpose (meaning), a life-crackling existence (emotion), and deep, soulful connection (community), these are the two things that are ailing, that are missing, that are falling in our society.  A society that has built itself up on the construct that science will solve all our problems, that the collective truth is more important than the individual truth, and that any time we feel something it is a danger because it means that our logical faculties are not working at their best.

We are ailing, we are sick.  As I mentioned, just look at the mental health statistics, at the statistics about loneliness, to know how this is not an exaggeration, this is not a fantasy cooked up.  This is reality.

And one of the answers, one of biggest answers, lies in that one thing that we as a society so like to relegate to a hobby, to the side, to a distraction.

And by “art” I do not just mean museums we go to on summer vacation. I do not mean just “entertainment”, that 10 billionth episode of Parks and Rec you streamed.  I do not mean your obsession with selling your friggin’ novel.

I’m talking about a cultural paradigm in which we have embraced a world in which creativity, self-expression, deeply personal works of monumental diversity, are a reality of life.  Where vulnerability is a way in which we live.  A reality we consider art classes just as important as a children’s hospital or STEM education or a priest’s speech at the pulpit.

Because art, self-expression, creativity that comes from deep within our souls and is smacked on the table for all to see… those are the vehicles by which meaning and emotion are given voice and are strengthened.  It is the way that even the most lonely person can feel less lonely.

Because art creates a community based on what is within us. A connection that can be formed just by reading a novel that says the words you thought only existed within.  A community in your heart, in other words. A community, a connection, a soul’s communion, of meaning, not of proximity, forced belief, or dry statements of “truth”.

Someone who is poor, with so little, perhaps not even food, has other ways he needs to be fed as well: through art.

In other words, and I want to make this as clear as possible: art is food.  Art is oxygen.  And whether we’re consuming it or creating it, it is essential to a life well-lived.  It is what can keep a concentration camp prisoner going.  It is what can keep the destitute living a life more meaningful than you or me.

Art is food.  Art is oxygen.  It is water. And the only reason we’ve found it so easy to ignore is because it is not as physical as technology, it is not as clear-cut as religious rules, it is not as seemingly impactful as money.

But the fact that our society is suffering from mental health agony, that its people repeatedly report a relative lack of meaning (according to one study, that number equals 75% of people in America) in their lives, even among the religious, is a sign that we while we may be a physically prosperous country, we are an artistically (and thus emotionally, and thus meaningfully) starving.  We are grasping for that food and not realizing it.  We are suffocating from the air of beauty not entering our lungs.  We are parched from the living waters of music, poetry, literature, and more that does not just entertain us, but that fulfills us.