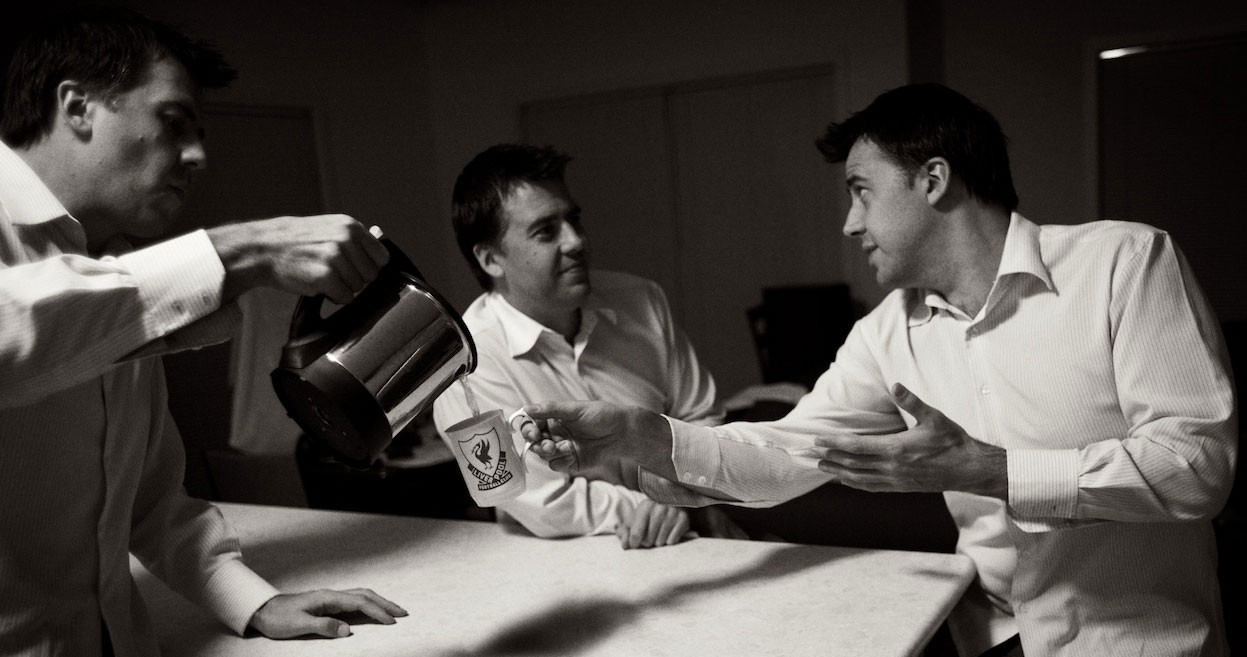 That seems to have been a common guttural freakout I’ve heard since I was young.

“When will Hollywood come up with something original already?”

Today, we don’t just complain about sequels.  Now we have to contend with about a gazillion comic book movies.

Not to mention the internet!  Home of unoriginality!  Home of the click-bait title that sounds like every other clickbait title!  Home of originality theft (sorry, I mean “curation”).

The people you’ll hear these complaints from the most, and who seem to be the ones who usually are the source of the complaints in the first place, are artists and art lovers.

Artists have a fascination with, and love for, originality.  I think that’s because at some point (or perhaps quite often), every artist has fallen in love with the fact that they can create something out of nothing.  That they can take a blank sheet of paper and turn it into a breathing, living thing that others will eat up like a roast chicken.

Every book and story Tolstoy ever wrote started with a blank piece of paper.  Every movie ever created by Kubrik probably started out with him high on shrooms in a field somewhere.

Point being, we artists love that aspect of our process.  That nothing to something.

And those “appreciators of the arts” the ones who watch Kubrik and read Tolstoy and love to read deep into each, are also in love with it.  They hold up these artists as proof of originality, of what “true art” is.  “Look! Originality is possible!” they tell us in triumph.  But also in harumph, because they look around and they don’t see Tolstoys or Kubriks.  They see a bunch of bastards turning movies into banks and the entire book system into a self-help mecca.

I think both the artists and the art lovers who yell about originality tend to view their yells to not be so much about any specific movie or book or blog, but about something else entirely: the laziness of our culture.  They look at the clickbaiters and sequels and whatnot, and they say, “Look at us!  A bunch of fools, an uneducated culture!”

But there’s a problem with this attitude.  There are two ways in which art is created, and the problem is that our artistic friends tend to romanticize one while practically ignoring the other one.

The first way art is created is that beautiful, amazing, ex-nihilo, blank paper way.  The something from nothing.  That’s what’s romanticized.

But there’s another, and it’s vastly under appreciated by the vast majority of artists and definitely by the art appreciators who don’t witness the creation of art firsthand.  This is the way of patient, steady growth.  Like Michelangelo finding “David” through 2 years of digilent chiseling, an artist only truly becomes a master of his craft if he does it over and over and over.  And, often, by creating the same type of thing over and over.

This part isn’t marked by as much drama as the first way, and so we tend to overlook it as a culture.  We love our dramatic artists.  The Bob Marleys who die young.  The Janis Joplins who OD.  The Hunter S. Thompsons who are Hunter S. Thompson.

Instead, this way is marked by slow evolution, not lightning claps of originality.  One piece on top of another until an entire body of work is made, each slightly more refined, slightly more beautiful, slightly more powerful than the one before.

The truth, in fact, is that way one is more something of a myth we like to tell ourselves.  Ironically, if anything, it is a sign of true laziness: a desire for art to come not from work but from some genius artist who doesn’t work hard, but is simply constantly accessing some spiritual reality where everything is made from nothing.

In fact, no piece of art is actually created from nothing.  Sure, we all start with blank sheets of paper, but we come to it with a brain full of everything we’ve consumed our entire lives.  Our brains are thieves, really, which is why everything creative is really just a combination of two or more things we’ve already consumed.

And Tolstoy wasn’t that original.  He wrote about Russian aristocrats while extolling the common man in practically every book he wrote.  And his books were freaking long, so he spent years working on the same thing.  What a bum.

Kubrik made nutty films that were almost all based off of books.

And perhaps part of the reason we love the Bob Marleys of the world is that we didn’t have to see them get old.  We can imagine them as original because they didn’t have enough chance for us to start to see the patterns in their work.

Does that mean that every sequel is some masterpiece or something? No.  Does it mean clickbait is good for our culture? No.

But there are an incredible list of sequels and clickbaits that are truly magnificent pieces of art.  It could be argued that the second of the Christopher Nolan “Batman” movies, “The Dark Night”, is one of the best movies made in the last decade.

And one of the most popular pieces of clickbait was that incredible quiz the New York Times did about the origin of our accents (it got almost 4 million Facebook shares!).  We all hate quizzes, right?  Classic click-bait.  But that one was beautiful and intriguing and eye-opening.

Yes, people sully the good name of sequels and clickbait because they see those styles of creation and how easy it is to trick people into buying into them, and package things that are ugly in the wrapping of potential beauty.

So people get confused, and they blame sequels and clickbait and unoriginality, which is how this frustration voiced by artists and the art appreciators spreads to the masses.

But the thing is that the same could be said of “original” creative work.  There are “bad” writers everywhere, those who imitate the style of other writers.  There are a million people out there trying to scam us in some way with their creative work, passing off ugly manipulation in a beautiful mask.

You may be wondering why I’m making this into a big deal, why I care so much about originality vs. unoriginality.  I suppose it’s actually because as a writer myself, I’ve finally come to the realization that I’ve let these myths get to my head.  I’ve been frustrated with myself for quite sometime for not writing enough “original” material.  Why was I constantly writing about creativity (I’m doing it right now!), mental health, deeply personal memoirish writing, and doing all these listicle photo posts?

In my mind, I convinced myself I was doing it out of fear, that I couldn’t possibly actually want to write about these things so much.

And so originality had become a sort of false idol for me, a moving target I could never reach because I was actually shutting off the valves of writing that kept me alive, that made me who I was.  Worse, I was stifling my own innate need to slowly, patiently evolve, as a Way #2 man.

And worse, I see this in my writing brethren.  I’m constantly asked by the writers on Hevria, and from other bloggers looking for advice, “Am I just doing the same thing over and over?  What’s wrong with me?  Am I just playing it safe?”

No, dear creative friend, you are being creative.  You are growing like a plant, slowly, slowly.  Yes, there’s that moment of dramatic appearance when you first sprout, but you cannot be addicted to that moment, just as a couple cannot become addicted to the way they felt on their first date.

In other words, as usual, the words of critics (and these critics are not limited to outward forces, often they live strongly within ourselves) are the true creativity killers.  False expectations.  Unrealistic assumptions about the nature of art.  And, worst of all, nasty, angry, nose-down demeaning comments that make the live soul of an artist wither within.

Even if it were all true, this originality business, it’s that sneering tone of “above-ness” that really ruins artists from within.  It is the cloud covering the sun that the artist needs to keep his creative soul growing.  Artists don’t need to be scolded, or to hear about other artists being scolded, whether they be huge Hollywood machines or small independent blogs.  What they need is to hear the constant positive cry of “Hurray, I found this and it’s beautiful!”.  You know, they way clickbait sounds.

That it is artist themselves who spread this myth and poisonous tone is what makes it all the more tragic.  It shows just how deeply they’ve internalized that art is about snobbishness or putting others down to raise ourselves up.

No, no, no.  The whole point of art is to excrete the heart and soul within us and let it loose, and then to share it as well we can with the world.  In form, often repeating ourselves or following themes that are true to us.

But in reality, actually, truly, original because it comes from our unique, non-DNA-duplicated selves.

And so, rather than complaining about the formulaic movies we got tricked into going to or the clickbait that didn’t love up to its title, imagine if we were merely enthusiastic about what we love.  Whether it is “original” or not.

Imagine, especially, if we artists created such a culture of passionate, unending positive support for our fellow expressers.  Imagine that.  Just as we right now are the seed of negative, sneering attitudes that spread to the rest of the world, we could spread our influence of unending enthusiasm of unflappable support, into the world.

That is the power of the artist: to affect the culture around him.  Precisely because people listen to him, precisely because, unlike the scholar, he can reach into people’s hearts and make it in the way his does.

We have that power, fellow artists.  As do you you, art appreciators (never call yourself critics, okay?).

Imagine that.  Imagine that truth.  That we don’t live to serve our own work, but that our work serves to uplift ourselves and the world around us.  And that our words are just a lesser version of that.

Imagine that, fellow artists and art appreciators.  Imagine that.  Because imagination is who we are, what we are.  We are the passionate dreamers that can imagine a better world.

So, let’s imagine a world where standards of originality are seen for what they are, and where sneering is just a faux pax.

And best of all, we are the imaginers who turn our dreams into a living, breathing world.  Together, we can make such a world.  I’ll see you there.