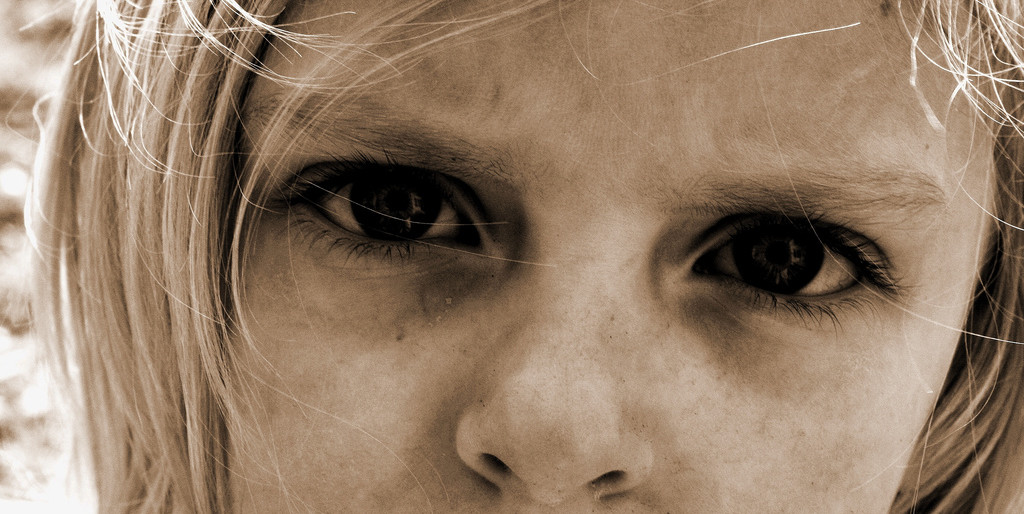 We were at a party.  We were having so much fun, it was so nice.

My daughter had gone down to the basement where all the kids were playing together.  I thought this was great.  She’s so social, so happy, so full of life.  For her, being around people is like breathing.  It’s her lifeblood, and the more she interacts, the more she smiles and plays and connects with people, the happier she is.

I’m still in pain over that.

It was time for us to go, and so I went towards the stairs to get her.  As I reached them, though, I heard a child crying.  It sounded like her, but I wasn’t sure.

And then I started going down the stairs, and I knew it was definitely her.  I was standing at the top, and watching as a boy who was maybe 7 or 8 and at least three times her size was chasing her around with his kiddie bag and making fun of her.  She was crying and crying.  And because she’s a warrior (despite being only 2 and a half) she was yelling, “No! No! No!” and trying to hit him as she ran away.

It was weird, because in the moment, I couldn’t connect with what was happening.  I went downstairs and I felt awkward and said something like, “I hope everyone is being nice to her.  She’s only 2,” with this kind of happy tone, like everything was okay, like some bully wasn’t tormenting my daughter.

I don’t think I was fully aware of how upset she was until I asked her to come with me.  She started screaming and said, “No! No!” like she said to the boy, like she was so confused about what was happening that she felt the whole world was against her.  I asked her if she wanted a hug and again she said, “No! No!” and pushed me away, crying harder.

I let her be, let her have her space a bit, and as I moved away, I saw the boy run upstairs.  He probably had been in this situation before.  He knew to get away.

Maybe if I was more aware, if I was a better parent, if I wasn’t so in denial about my daughter’s pain, then I would have grabbed him and demanded he take me to his parents.  Maybe I would have been able to help my daughter feel safer.

It’s so hard to look back at it.  This was the first time I ever saw my own child, my first child, so tormented by a cruel world.  I had this idea in my head that I could protect her from everything.  She’s just so sweet.  The world doesn’t deserve her.  So she should be protected.

And as the night progressed, and I finally grabbed her, while she kicked and screamed saying she didn’t want to go, when I took her upstairs and offered her a cookie and she smiled and accepted as if two seconds ago she wasn’t still in so much pain, as I watched her slowly recover and become herself again… all that had transpired started to sink in.

And that’s when all this pain started to flow into me.  Slow at first.  But then faster.  And by the time we arrived at home, and she seemed recovered, that I finally let it all in.

Almost like it was the first time, I saw her face when I came down there.  The way it was screwed up in this intense pain, red, wet from tears, defiant.  The way she seemed so confused when I tried to give her a hug and she just screamed and screamed.

I’ve never felt this pain for another person before.  It was so intense.  It’s still intense.  Like I was down there getting bullied by someone three times my size.  And on top of that pain, I felt this immense guilt for not checking on her more often.  For assuming she was totally fine.  For being naive.

And as the pain flowed through me, and as it has stayed with me to this day, I realized there as an even deeper pain that I have been avoiding: the pain of realizing that I will never be able to protect my daughter from the world completely.  That the world inherently possesses negativity, possesses pain, possesses evil.  That even if I had protected her this one time, there will be other times (school, birthday parties, whatever) when I would be unable to protect her.

And the pain of that was so strong that even now as I write this I feel like my heart is in my stomach.  I can hardly stand it.  My daughter, my sweet, good, happy, smiley daughter, is going to be exposed more and more to the harsh wintry world called life.

And as that pain has flowed through me, has enveloped me, I’ve been trying to figure out a positive takeaway from something so scary.  What can I do?  How can I help?  What is my role?

It’s been interesting, because since that day I’ve intuitively been nicer to my daughter around the home.  I’ve been giving her extra hugs and kisses (oh gosh, she loves those), I’ve been softer to her when she misbehaves, I’ve been trying to give her more attention.

And as I’ve done this, and I’ve seen her bright happy smile come bounce back at my face, I’ve realized that this is the main answer: that I can’t protect her from the world, but I can give her a place where she feels like the world can’t get to her.  A place that makes sense.  A place that’s as bright and as happy as her.

They call that place a home.

I can build it for her, I can put my heart and soul into it, and hug her and squeeze her whenever I can, pay attention to her like she needs, make the money I need to make to make her comfortable.

I have control over my home.  I don’t have control over the world.  I need to accept that my daughter will forever be spending her life wrestling with that reality, and that it will be so much healthier for me to focus on what I can control than on fighting boogeymen for my entire life.