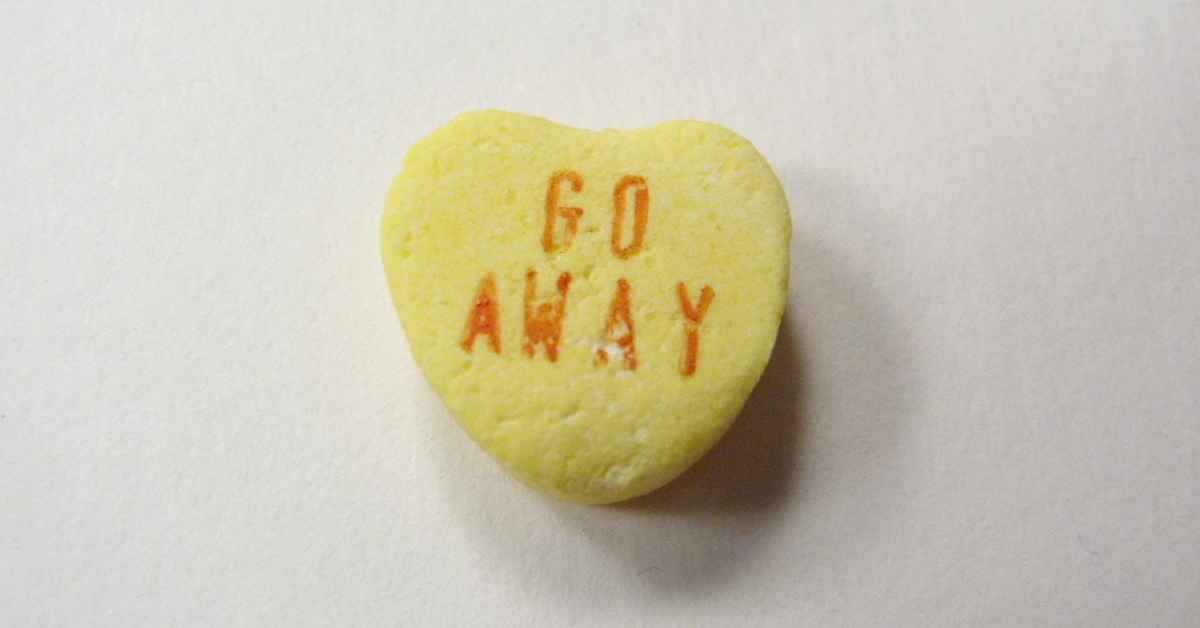 Contrary to popular belief, there are people who are unqualified to be religious.    Most people tend to think that religion is a set of beliefs that you choose to bring into your consciousness.  Then those beliefs lead you to act or behave a certain way.

But it’s not that simple.  Because belief is complicated, and so is the human psyche that absorbs that belief.   And our actions come from just as complicated a place, one that often has nothing to do with the beliefs we claim to have.

The unfortunate result of people who are unqualified to be religious is that they destroy the religion they inhabit.  They become like the bad apple that makes the others go rotten.  They’re an infection.  And even worse, because they wear the garb and the actions of a religious person, people on the inside and outside associate them with religiosity and with their religion especially.

If you have any of the below qualities, I suggest you stop being religious.  I will provide other suggestions for what you can do with your time at the bottom, so don’t worry, there are places for you to go.  But in the meantime, you should understand that religion is based off the will of something higher and beyond us.  It is meant to build communities where truth and higher truth and morality are the bedrock of existence.

In other words, if you have these qualities, you are undermining those communities.  And you should find other ways to spend your precious time.

1. They obsess over authority

But there is a difference between a love, respect, and humility for the authority figures in the religious world and the obsessive zeal some people throw onto them.

People like this will not make a move without getting the “go-ahead” from someone “above” them.  They will refuse to even consider the possibility that the authority figure may be wrong in certain cases.  They deny even a hint of humanity in these figures.

Often, in my opinion, this comes from a place of fear and complete and utter weakness of personal character.  It is a place of insecurity that believes this person is not worthy.  They believe they are not whole humans and thus they need the guidance of super-human figures to set them straight.

These actions hurt the community of the religion they inhabit because it gives a power to people who should have power not because they were simply granted authority but because they deserve that authority.  It also hurts it because it spreads the myth that religion is not about thinking for oneself (with the help of leaders, mentors, friends, and more).

This alone is enough to disqualify someone from being religious.

Where they should go: It would be far better if they joined a world where such realities are rewarded and part of inherent belief (whereas most religious texts do not actually condone such self-brainwashing).

Maybe they should move to a country with a dictatorship where the leader claims to be divine?  North Korea sounds about right.  Or if it is too hard for you to jump from religion to nationalism perhaps a perverse form of religion would serve them well, where the followers obsess over the leaders as much as you do.  I’m speaking of a cult.  Or maybe terrorist organization.  Either way, you’ll have your leader you can turn into an idol, and follow blindly along with an entire community that supports your beliefs.

2. They aren’t willing to fight their own people

As a Jew, I often hear people wondering aloud, “Where are all the Muslims sticking up against the terrorists in their midst?!”

Of course, there are plenty of Muslims who do, but I’m sure there are many that don’t.

But what I find ironic about that statement is that at times, it is yelled from the mountaintops, often more violently than any others, by the very people that would not think for a second to speak up against their own people.

These are the type of people that see a protest against a cultural problem in a community, such as sexism or hiding abuse, and attack the protestors.  So, to be clear, they are willing to fight their own people.  But only the people who have chosen to take up the first fight.  They’re willing to fight the rebels.  Because, to them, a rebel is a danger.  A rebel is worse than an abuser or perhaps even a murderer because they threaten the idealized community these people think they live in.

To a person who shouldn’t be religious, their community is a tool.  It’s a tool to make them feel comfortable.  A tool to make them feel like they live in a world of absolute truth without any real problems, whose leaders can’t make mistakes (see #1), where any supposed problems are really just manufactured by the “outside” or by the rebels.

These people don’t actually care about their community.  They care about how their community makes them feel.  And a rebel, someone who speaks up against the leaders or the issues in that community (unneeded note: all communities have problems), is popping the bubble the “Shouldn’t Be Religious” person has made for themselves.

This is why these folks will do such unthinkable things as literally attack their own people for rebelling.  Suddenly, the rebels are not part of their people anymore.  Because “their people” means the ones who are part of that idealized vision.

Where they should go:People with this issue are especially suited to a cult.   Scientology, perhaps.  One where rebellion is crushed, not accepted, and problems are ignored.

They could also move to a secular suburb, the kind that values success and conformity over free thinking and creativity.  They’d have quite a bit of power on the PTA, for example.  Really, it’s all the same, so I encourage such people to take their pick.

3. They talk about their religion a lot

This one may sound surprising.  After all, some of the greatest leaders in the religious world tend to have Torah (or whatever holy book) words coming out of their mouths at all time.  In fact, it’s quite often seen as a virtue.

I obviously agree with that, and I wish I had more Torah I could bust out at any moment.

There’s a distinction between actual holy words being spoken, and words that are used as a tool for rationalization.

The way to tell the difference is this: a holy person knows how to apply the words of divinity they know so well into real-world, down-to-earth circumstances.  They also use those words as a source for their point of view.  In other words, it comes from within them, and it guides their moral compass.

In my experience there are very few people who truly live this way fully.  In Hassidus, we call them Tzaddikim.

The people who I’m talking about are the ones who do it the other way around.  They use religion and, more importantly, religious identity, as a self-serving tool for achieving their own ends.  Often, this is subconcious. But it is done nonetheless, and quite often.

These are the type of people that will remind you, “The Bible says this” when they debate you, as if there is one absolute position, as if there is no room for debate, as if there are no other alternatives.  They do this because to them, a holy word is not about inner change but about their attempt to control their environment (and you).

By bombarding others with their supposed knowledge (with, even if strong, is clearly not multi-faceted or creative), they attempt to turn themselves into a sort of authority figure, and often the people like you and me, who can’t quote things at will, are left blubbering because we’re just simple folks trying to do the right thing.

The truth is that if you start examining their words, and you look up all their quotes, you see just how much more complicated whatever truth they just threw at you is.  You see that they were building you a house of cards, ready to crumble at the moment it is touched and prodded.

The worst part of all is that most of us are not willing or able to examine every article they throw at us, so we often will fall for their weak theology.  We feel insecure in our own knowledge, and so in that way their attempts at control work.

This leads to a culture of intimidation, a culture where people do not question but who listen to the ones who spout out the most “holy words” they can in one sentence.  A community of people who live in fear of being called out, even worse, in public for their supposed sinfulness, as proven by such and such quote.

Where they should go: The people who use words as a tool to control others have quite a few options at their disposal.  One is to lead a cult, although that is not for everyone, since you’d have to also believe you actually are an authority, which contradicts #1.

A better option, perhaps, would be some sort of protest group or rebellion.  There are a variety of choices in this field.  They could choose an activist group that is built on empty slogans and who go out onto street corners and repeat slogans others yell at passerbys (not that all activists are like this).  You could even join an actual rebellion in a far-flung country, if you’re willing.  One where there isn’t a clear direction, but a lot of anger, slogans, and conformity.  ISIS maybe, if you’re in the mood.

Now, to be clear, I do not mean to say that people should make these choices permanently, but I think that the above three qualities are what poison communities, and they are the reasons so much gets twisted and confused in the religious world.  While they love to blame the secular world for criticizing their communities in the media, they are often the source and reason for this criticism.  Their actions are what we Jews call a “Hillul Hashem”, a desecration of G-d.

It’s unfortunate, because most of these folks don’t realize the damage they are causing or even that they live in their own prisons of conformity and even idol worship.  It’s most subconcious.

That is why I think it would be good for them to take a break, and go join a cult or ISIS or a suburb.  They can apply their subconscious insecurities and damage to places that accept such ways of thinking, not places that are meant to be beacons of light and truth.

My guess is that eventually they’d get sick of it, because to actually live in the community they are imagining would be hell (although, unfortunately, it seems some people prefer hell, which is much more predictable than reality).

Either way, I hope they leave.  And I hope they come back.  But mostly, at this stage, they need to leave.  Because our communities, the religious ones, no matter what religion, need healing, need to stop being distracted by their nonsense.  The secular press needs something better to talk about.

We could all take a breather, couldn’t we?  Here’s hoping.