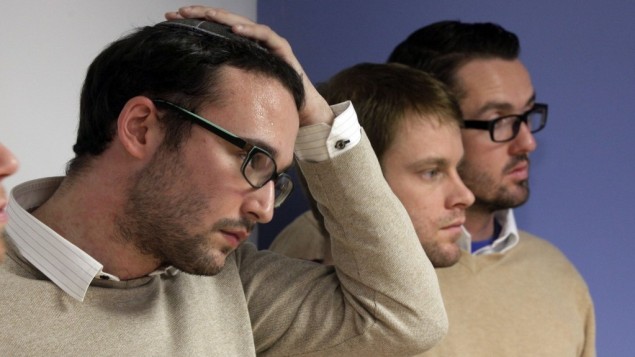 Note from Elad in 2021: 7 years ago, I asked Chaim Levin to write a guest post on my blog about being a gay Chabadnik. I was trying to be open-minded, and to help someone tell his story. But ultimately, I chickened out: I was afraid that I would be endorsing his “choice” and thus ended up telling him I wasn’t publishing it.

Today, I was going through my old blog posts and unpublishing the particularly embarrassing ones. But, I also got to publish a piece: Chaim’s.

I’m grateful that Chaim saw past this even after so much time, and that we are now friends. I wish I realized at the time how much people like him give, and how much pain they hold onto, even as people like myself who claimed to love them still rejected them.

I love you truly, Chaim, and I appreciate your forgiveness more than you know. But still, I am glad that I can do a tiny thing to right this wrong so many years later.

The atmosphere buzzed with energy and talk about who we are as Chassidim and disciples of the late Lubavitcher Rebbe at a farbrengen (gathering) for a former classmate’s birthday a few months ago. While familiar with these affairs, I hadn’t been to one in quite awhile. As at any good farbrengen and after a few l’chaims, I started talking about growing up Chabad and gay. Some did not deign to acknowledge the topic at all; others approached it with anxiety and trepidation. It is simply not normal to discuss such things at these get togethers — but, hey, I didn’t become an activist by remaining silent. After we started peacefully discussing different aspects of homosexuality in the Jewish community, I tried to make an important point. I observed to an individual, who had expressed homophobic leanings and tried to minimize the issues that LGBTQ people face within more orthodox communities, that, while I may very well be the only out gay person sitting at this table of 20, it is very unlikely that I am the only gay person there. He tried to refute me claiming that he knew for a fact that I was the only gay person there — the all too common, blanket, unfounded denial that feeds alienation and isolation of queer people within the Chassidic community.

But, my statement was assured; we are here, many still struggling in silence and fear, and we are not alone.

Many people from frum/Orthodox communities have contacted me seeking guidance and advice. Like me at one time, they’ve felt alone and had never spoke to an out gay person. They’ve thought it might just be a phase that would hopefully go away if only they met the “right girl”. Trying my best to be objective and honest, I answer their questions about what it is like living as I do with the “whole world” knowing and how people have reacted towards my being openly gay.

It hasn’t always been a picnic. Coming out especially in Chassidic communities can be detrimental to one’s self, family and overall sanity if not prepared. Sometimes I feel as if I were pushed out. I had confided in a friend while at yeshiva in Brunoy, France, at the age of 16 (yes, I really was a Brunoy boy). Soon the entire school of more than 400 found out about me. Publicly humiliated by some and ignored by most, an ocean away from home, I was seen as a diseased person who did not belong. During those 8 trying months at yeshiva, some denial about the gossip and hatred helped me to survive, not to mention the support of the very few who I would dare say were real Chassidim — those who, despite the fact that they had never heard of such a thing in their lives, remained my friends and were supportive of me, genuine, accepting and inviting unconditionally.

Still I felt isolated and was unaccepting of myself until, paradoxically, I sought out reparative ‘therapy’, hoping to become straight in order to be accepted by the only community I had ever known. I had never interacted with anyone who wasn’t a fellow Lubavitcher until I was 18. Trying everything I could to assure my place in my family and community, I inadvertently ventured into the outside world, met others who were struggling and developed a somewhat different perspective. I learned there were other kinds of Chassidim and Jewish people out there — ones like me. I found myself exploring a new world. Yet, I did not fully accept who I am until I was 20. Some skeptics and critics try to convince me that by living my life honestly, I’m hurting my family and my soul. Until I was 20, I had wrenched, wrung and racked my soul, praying, pleading, begging for some miracle to turn me straight during weekly trips to the Ohel (the Lubavitcher Rebbe’s resting place). The best thing that ever happened to my soul was finding peace when I stopped fighting against, not a “desire” or “inclination” as some would describe it, but an inalienable part of me.

Even though I was able to accept myself, experience made me pessimistic about my community. Fortunately, though, living in Crown Heights has gotten easier and easier by the day. Today 6 years after I was outed, I’ve been pleasantly surprised by people on the street, patting on the back and letting me know that they’re supportive of me and my journey. And, once dismissive, long time family friends have told me on many occasions, “Chaim, I love you and accept you as you are.” A very Lubavitch attitude indeed. This is the message Chabad tries to spread and instill around the world — that every single Jewish soul is worthy, a ray of light with something to offer. Still, I never thought I would experience this attitude usually reserved for those who drive to shul on Shabbos and but nonetheless try to return to Orthodoxy at Chabad houses around the world — certainly, not among our very own friends, family and community in Crown Heights, in “the Rebbe’s schunah” (neighborhood).

In Crown Heights, I have occasionally had the great displeasure of bumping into people like Molly Resnick, whom many consider one of the greatest, most public examples of intolerance and bigotry within the Lubavitch movement today. Nonetheless, the voices of the Molly Resnicks are being drowned out by the people, including my own family, who have grown, not just to tolerate me, but to embrace me fully for who I am.

“Once a Chassid, always a Chassid” is often heard at the Chabad schools, camps and farbrengens. Still, I do not consider myself as religious as I once was. However, when I started dating someone a year and a half ago, I did take some pride in having grown up Orthodox and being able to tell him about it. He had grown up in a rural area with no Jewish upbringing or identity, but, the more I told him, the more interested he became in Judaism. A year later, he bought his first pair of tefillin in a Crown Heights Judaica store as I stood with him eagerly, despite the negative experiences I had had.

Nonetheless, I could have never imagined that one day a gay Jewish voice would be welcome at farbrengens; I could have never imagined 6 years ago feeling proud to walk the streets of Crown Heights even despite some intolerance. The negative voices are slowly dying out, and more positive and accepting voices are being heard louder and louder. Everyone should be able to live openly and honestly without pretense nor fear of losing family, friends and community. I truly hope and believe that there will come a day when anyone who is LGBTQ can be accepted as they are and know that they are not alone.