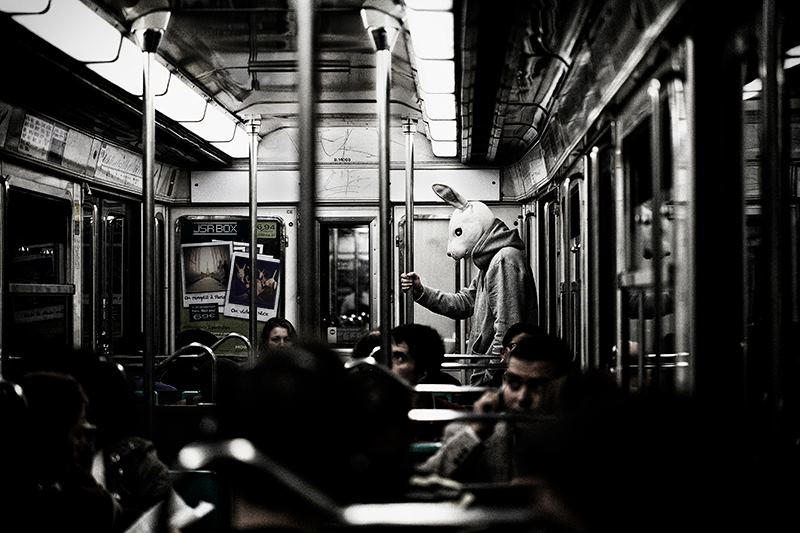 In New York, there are these people.  I’m not sure if they have a name, but I call them “swipers”.  They stand by the entrance to the subway and ask people if they would be willing to “swipe” them onto the train.  To swipe their MetroCards so that the people can get a ride on the subway.

Usually, these people are clearly down and out.  You could see how they might not have $2.50 to spare.  Every now and then it’s someone who’s just forgotten cash and their credit card got rejected or something.  These people are just normal, I guess.

Today, though, I saw a swiper at the Kingston subway stop.  He was standing there saying in this weirdly confident way, “Swipe?  Swipe?”

The first person said no, and for some reason, some part of me thought, “Good.”

But then another person came and they swiped him through, just as I was going through.  He scooted past me, like he didn’t want people to know that he was a swiper, that he was just one of the rest.

As I watched him pass me, I couldn’t help but feel suspicious.  His clothes weren’t shabby.  He was wearing colorful, cool-kid Nike shoes, a cool-kid Nike bag, even a cool-kid cap.  This didn’t look like a guy that was down and out.  This wasn’t someone who wouldn’t have money on him.  Give me a break, ridiculous.

He started walking up to the end of the subway, but that was my area.  I go to to the end of the train where there are less people so I can write in virtual solitude.  I had a plan today, you see: I was going to write about why people matter more than ideas.  Or about why turning thirty in a few months freaks me out.  Whatever, I had a few plans.

And so I walked ahead, and I passed him.  Okay, I was close, almost at the end, in my writer’s nook, I started to relax.  Whatever, forget this guy, focus on your writing, I thought.

This was already surprising to me.  I was convinced this guy wasn’t Jewish.  The stereotyping, nose-down judging, side of me was convinced at least.

And then he started asking me about a friend of his.  He wondered if I knew him.  I didn’t, of course.

He had a funny way of talking.  A bit fast.  A bit off-balance.  A bit too strong.

He said it just like that, with the italics and exclamation mark.  I tried to smile back.  This whole situation was confusing me.  The side that made snap judgments, at least.

“Yeah, man, been spending the whole day looking for him,” he said, talking about his friend, “Can’t find him, ya know.  If you run into him, you’ll tell him [name redacted] is looking for him, right? Right?”

I nodded and smiled, and for some reason realizing that my stereotypes were being actively destroyed in front of my eyes, relaxed me.  I realized this was someone that needed help, that he probably had a good reason for being a swiper.  That he wasn’t a cheat.

I asked him where he was from.  “Brooklyn, baby,” he said.  Where you staying now, I asked. “Shelter,” he said simply, “They gave us MetroCards, but I didn’t realize they only had two rides, can you believe that?”

My heart melted.  In that moment, I realized how much of a bastard I was, how much I had violated everything I believed in by stereotyping him based on the way he was dressed, on the way I looked at these swipers, the way I look at people different than me.

This was a kid that needed help.

I asked him if he wanted money.  He looked up at me in surprise, “Oh yeah, you got money?” as if this was a novel thought.

I gave him some, more than I normally give (maybe I thought it would atone for my sins or something), and I said it was great to meet him.  He changed the subject away from the money quickly, I could tell he didn’t even wanna talk about it, he wanted to pretend that he was doing okay, that he didn’t need it, that he just wanted to see his friend.

And after we finally said goodbye and I again promised him I would tell his buddy that was awesome that I saw him, I turned around, and started walking towards the end of station as I was planning to earlier.

And not just realize it about him, but about all the others that I judge in a moment.  The ones I look down at and scoff, and am sure that I’m the only one actually living honestly.  This part of me that creates a fictional world of bad people around me.

I’ve wanted to cry this whole time, thinking about it, but I’m glad I chose to write about it instead.  Glad I told you about it.

But, if you’ll excuse me, I think I still need to cry.