I still remember it. It’s funny when a TV show, the kind of thing most people, even if they like it, tend to think is a waste of time, changes your life. You wouldn’t think it would be possible for something so easily consumable to affect you deep in your soul.

There she was, it was Maya Angelou. Sitting there talking to Dave Chappelle on a show called Iconoclasts, a show where two trendsetters just basically sit down and talk.

Dave Chappelle had just quit his show, walked out on $50 million. Some sad he was crazy. He just said he realized that his humor wasn’t bringing people together, it was dividing them, making some hate blacks even more. He was on a journey.

And here he was, this guy who made such a bold decision, someone that at the time I looked up to and even admired a bit, and he was sitting in front of Maya Angelou in awe. She was speaking to him like you would imagine Maya Angelou to speak. She spoke like the words coming out of her mouth were alive, like every word she said counted. Everything sounded like a poem.

This is a woman who was friends with Martin Luther King. Who participated in the Civil Rights Movement on an organizational level. A woman who sympathized with Malcolm X, and was happy to see him eventually see that what Rev. King was doing was the right way. This is a woman who wrote the powerful “When the Caged Bird Sings”. A special woman. 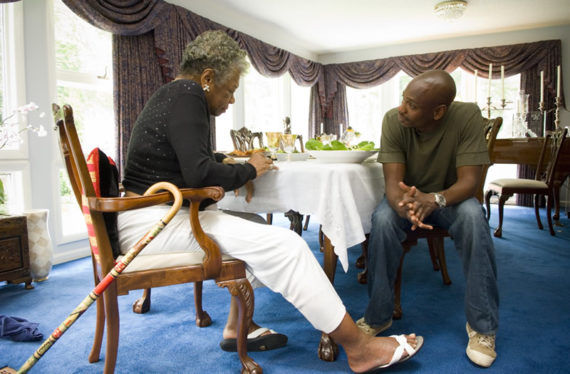 And here I am, some hippie kid at ASU, watching this video, and I’m expecting her to say all sorts of revolutionary things.

But she doesn’t. It’s mostly just this poetry, this beauty, this love.

And then Dave Chappelle is talking about the “n” word, saying that he and Mos Def agreed they should reduce the power of the word by using it in a different context, by changing its associations, by using it to their own advantage. He has a whole philosophy on it, and as he’s explaining it, you can see, this is a man who’s not so sure of himself, a man who is reevaluating his whole life, but still he tries to make the point.

And Maya Angelou, she just looks at him with these big soft eyes and she says to him, “I believe it goes into the upholstery and then to the rugs and into my hair. Into my clothes. Finally, even into my body.”

And now, as I’m watching, my eyes are wide. I’m an aspiring writer and I wonder what the hell this woman is talking about.

“I believe words are things,” she says.

She begins to describe a bottle that has the word “poison” written on it. On this bottle, we know that what’s inside is poison. It’s evident.

But then, she says, if you put that same poison in Bavarian crystal… that doesn’t mean it’s not poison.

“The ‘n’ word was created to divest people of their humanity,” she says, “Words are things.”

Most of the show I hadn’t paid so much attention to, but now I’m rapt. And I see that Chappelle is also. The man can’t say anything. Maya Angelou knows the power of the word more than anyone in the world, possibly.

Do you want to know why I’m religious? It’s because of moments like this that I experienced before I was religious. Long before I learned that the Hebrew word for “word” is the same as the word for “thing”.

Maya Angelou spoke this truth and it resonated with me. Resonated with me because it’s something we all know is true even if we don’t acknowledge it. We try to pretend our words aren’t powerful, they don’t have something inherently strong in them that make them just as strong as a sledgehammer or food or poison or medicine, depending on how we use them. We don’t want to admit it, because it’s scary. Scary to think that every word we say is a thing. A deed.

But the truth is, when we accept this reality, when we go deep within ourselves and admit the power of words, when we’re careful with the words we use and deliberate with the way we present them, we have even more power than we had before. A tool is only truly powerful if we’re aware that we wield it.

In a documentary, Bob Marley’s wife, Rita Marley, said that Marley used his words like a gun. She used her hands to make the shape of a gun and indicate how every lyric he composed was a bullet aimed at the injustice of the world. The man was aware of the power of his words and his music, and this guy from this little country, from this little group of unknown religious zealots called Rastafarians, changed the world.

That’s the power we have when we listen to Maya Angelou. When we realize that words are real, that words are things.  This isn’t just fancy, mystical talk. It’s a reality.